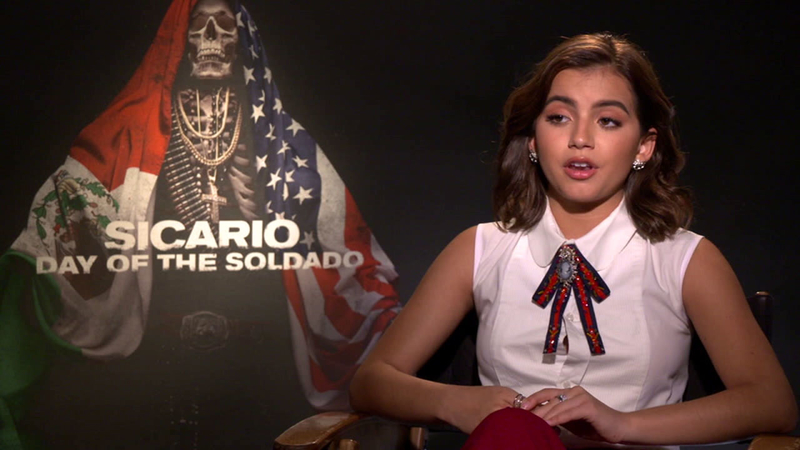 Young star of 'Sicario' sequel holds her own

LOS ANGELES (KABC) -- Her name may be new to Hollywood, but Isabela Moner's star is clearly on the rise.

The 16-year-old holds her own opposite the powerhouse team of Josh Brolin and Benicio del Toro in the sequel "Sicario: Day of the Soldado."

From day one, her more seasoned co-stars were notably impressed.

"I don't know man, once in a while you come across an innate talent, there's something about her," said Brolin. "Benny and I both, he'll tell you, we reacted severely on set when she would be doing a scene, and we're like, how do you know how to do that?"

"It's gonna be really interesting to see what she can do with that talent because she has that thing where she can connect the thoughts and ideas to the emotion," said del Toro. "Which is something that it takes actors years, sometimes decades... it's taken me 20-30 years to get to that!"

The on-set admiration was mutual.

"I loved just watching them, do their thing," said Moner. "I'm convinced that Benicio with that death stare, he's really just thinking about bunnies or ... I don't know what he does or how he does it but I'm impressed."

In this dark and gritty "Sicario" sequel, Moner plays the daughter of a drug cartel leader.

Next up, she'll star in the live-action version of the kid-friendly, "Dora the Explorer."

Isabela wants to do it all!

"I think I knew I was a performer at a very young age, I think my parents knew," said Moner. "I was singing and performing for my stuffed animals in my crib, to the point my mom had to turn off the baby monitor. I never wanted to do anything else. Ever."