Garcetti in favor of opening up COVID vaccination appointments for all adults, but decision up to LA County 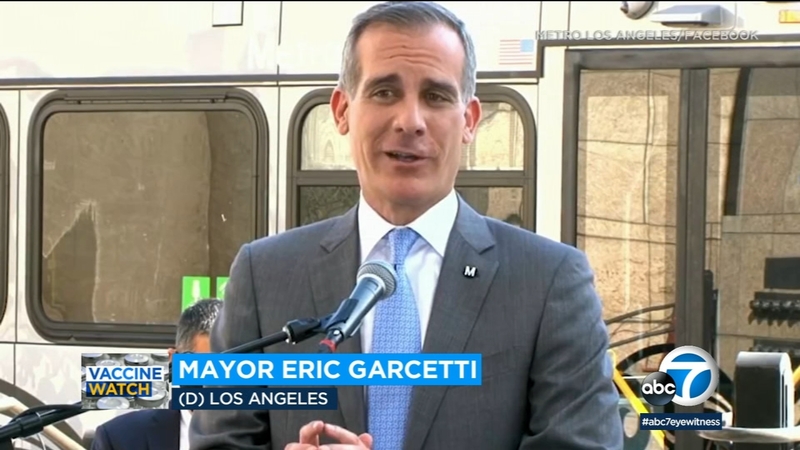 Mayor Eric Garcetti said he's in favor of opening up COVID-19 vaccination appointments to people 16 and older since the city-run sites have appointments available, but it is up to the Los Angeles County Department of Public Health to make the determination.

Eligibility is set to expand this April 15.

"There is no question there is going to be a strong run on vaccines in the first week or two. And we ask people as we always do when there are new categories for patience because there are not going to be enough appointments," Garcetti said.

The mayor says the city and county have been informed they are receiving less vaccines from the federal distribution next week. The city is expected to receive just over 100,000 doses.

Meanwhile, the number of people hospitalized in Los Angeles County due to COVID-19 has dipped again, keeping the total below 600 for the bulk of April -- but health officials again urged residents to keep taking precautions against infection and to get vaccinated when eligible.

"By continuing to take action to reduce transmission and get vaccinated, we are making great progress keeping cases and hospitalizations low,'' Public Health Director Barbara Ferrer said in a statement. "It is still too early to think we are out of the woods because, even if you have been vaccinated, many others have not yet had a chance.

"Transmission is moderate in L.A. County with a number of variants of concern circulating,'' she said.

According to state figures, which generally pace a day ahead of numbers provided by the county, there were 540 people hospitalized in Los Angeles County due to COVID on Thursday, down from 572 on Wednesday. There were 139 people in intensive care, up slightly from 136 on Wednesday.

Ferrer said Wednesday that while COVID-19 cases and hospitalizations have continued dropping in the county, the rate of decline has slowed significantly.

According to Ferrer, the average number of daily new COVID-19 infections dropped by 82% during the month of February. In March, it dropped by only 42%, and by the end of the March, our case numbers stopped significantly declining altogether,'' Ferrer said.

Daily hospitalization numbers showed a similar pattern, dropping by 70% in February, but only by 57% in March.

The only metric to buck the trend was the number of COVID deaths, with the daily average dropping by 63% in February and then 86% in March.

On Thursday, the county reported another 52 COVID-19 deaths, while Long Beach health officials added two more, lifting the death toll from throughout the pandemic to 23,390.

The county also announced another 710 new cases, while Long Beach reported 27 and Pasadena three, raising the cumulative total since the pandemic began to 1,223,821.