The suspect's father says his son was having a panic attack when he was being beaten by Long Beach police and attorneys say a medical examination team should've been there to help.
KABC
By Veronica Miracle 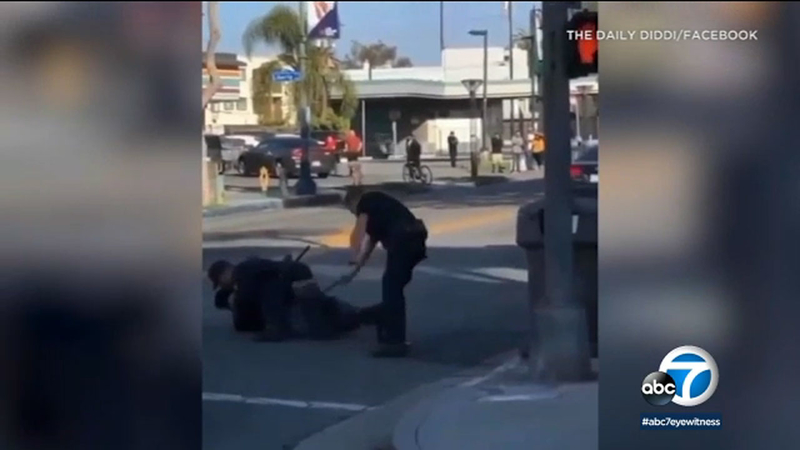 LONG BEACH, Calif. (KABC) -- The family of Eugene Martindale III has filed a complaint against the Long Beach Police Department after the family claimed Martindale was beaten by police in February.

Lawyers claim Martindale, 24, was having a mental health crisis near a 7-Eleven in Long Beach. The complaint alleges a security guard wrongfully accused him of trying to carjack people and Tasered him before calling police.

The complaint alleges Martindale did not resist arrest but was still beaten by officers. The carjacking charges against him were eventually dropped, but Martindale was initially taken into custody.

Eyewitness News reached out to the Long Beach Police Department for comment but have not yet heard back.

In a video, it can be seen that Martindale is the man being hit repeatedly by Long Beach police in February.

Lawyers are calling it a "Rodney King-like" beating.

"He was not resisting. You'll see his legs kicking up but that's because he was being beaten," Toni Jaramilla, Martindale's attorney said.

Martindale's father says his son was simply having a panic attack, and attorneys say the city's medical examination team should've been there to help him.

"Usually he gets help, someone will loan him a phone or someone will call for him, and I'll come and get him," said father Eugene Martindale Jr.

"They should have called the MET team to come out and do an examination of Mr. Martindale prior to any force being used." said Rodney Diggs, Martindale's attorney.

Martindale Jr. is still torn that this happened to his son.