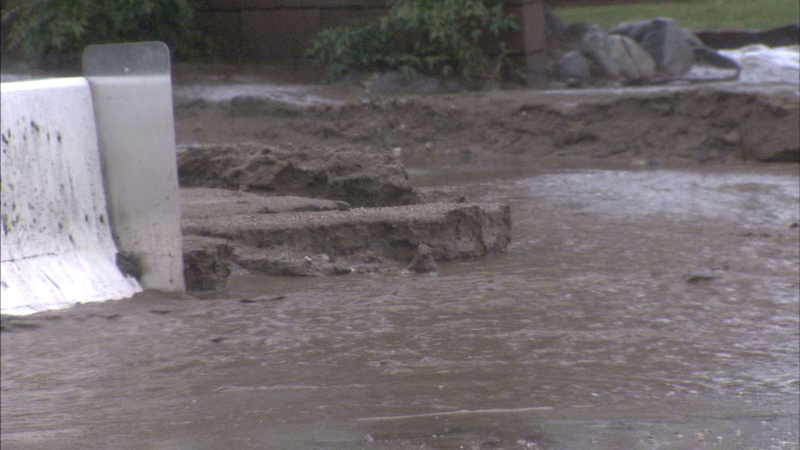 DUARTE, Calif. (KABC) -- Evacuation orders remained in effect for many of the Southland's recent burn areas as a massive storm made its way into the region Sunday.

A mandatory order to evacuate was given for the Fish Fire impact area in Duarte as of 7 a.m. Los Angeles County sheriff's deputies went door-to-door to inform residents, some of whom declined to leave.

"We encourage them to evacuate just for safety," Deputy Matthew Thomas said. "If they choose not to evacuate, then we'll have them sign a refusal or a waiver, notifying them that it's in their best interest to evacuate."

Homeowners were being advised that if they left the area, they would not be allowed to return to their residences until the order was lifted, Thomas said.

The Duarte Unified School District announced that Monday's classes were canceled at Valley View Elementary School due to weather.

The city at 7 a.m. opened the Duarte Community Center, at 1600 Huntington Drive, to temporarily house those who choose to leave their homes. Meals were being provided, but residents were advised to bring medical and other supplies they may need for a 48-hour period.

City crews and residents were out at the K-rails Sunday morning trying to clean up some of the mud and redirect it away from homes as it flowed through the streets from the damaged hillsides.

Similarly, a voluntary evacuation order took effect at 8 a.m. in Glendora, which was ravaged by the nearly 2,000-acre Colby Fire in January 2014. Sunday's directive affected about 1,000 homes north of Sierra Madre Avenue.

In Santa Clarita, scene of the 41,432-acre Sand Fire in 2016, 120 homes in the burn area were ordered to evacuate by 10 p.m. Saturday. County officials are concerned that debris flows could restrict emergency responders' access to the area in the event of mudslides.

On its Twitter account, the sheriff's Santa Clarita Valley station posted dashcam video around 12:30 p.m. Sunday that showed flooding on one of several washed-out roads in the Val Verde area. Residents in that neighborhood were urged to shelter in place.

An evacuation center was opened at Canyon High School, located at 19300 Nadal St. in Santa Clarita. Small animals may be taken to the Castaic Animal Shelter at 31044 Charlie Canyon Road in Castaic.

Flash flood watches are scheduled until Sunday evening for much of Southern California, including the San Fernando, San Gabriel, Santa Clarita and Antelope valleys, the mountain areas of L.A. and Ventura counties, as well the coastal areas of those counties. The flood watches may have to be extended in burn areas, the National Weather Service said.