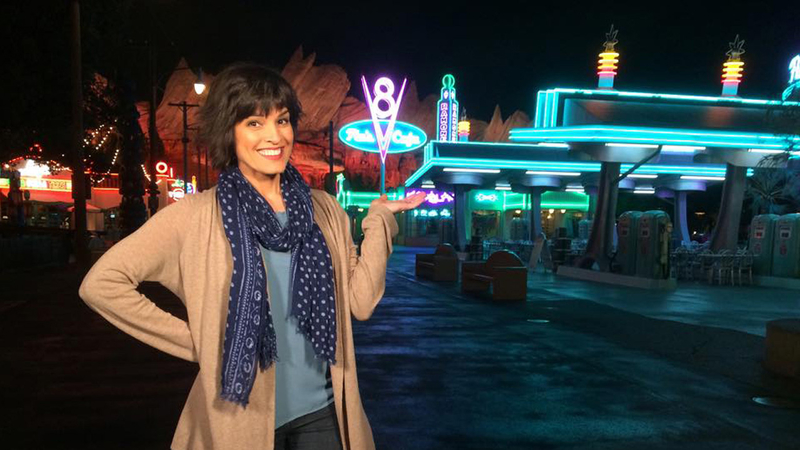 ANAHEIM, Calif. (KABC) -- The Happiest Place on Earth is celebrating their 60th birthday and you do not want to miss this party! Disneyland's Diamond Celebration has brand new shows, exclusive merchandise, and sparkling new additions to their timeless attractions. Eye on LA has the inside look at the magic and history of Walt Disney's first storytelling park. We're taking you on an adventure down Main Street U.S.A to show you the best entertainment and thrills with a little help from the minds behind the magic.

INNOVATION
Walt Disney opened the park on July 17, 1955, with technology and creativity many had never seen before. His mind was always open to new ideas and his imagination was endless.
The Disneyland Monorail System opened in June of 1959 as the first daily operating monorail in the Western Hemisphere. The Matterhorn Bobsleds were also introduced in 1959 as the first tubular steel roller coaster in the world. This attraction raised the bar and set the standard for the modern-day roller coaster design.
In 1963, Walt introduced the world to animatronics with his singing birds in the Enchanted Tiki Room. A year after Walt's passing, The Pirates of the Caribbean attraction in New Orleans Square opened in March of 1967, featuring over 120 animatronic figures that guests often sing along with to the tune of "Yo Ho Ho (A Pirate's Life for Me)".
The Disney Imagineers today have worked hard to continue Walt's legacy by always challenging themselves to reinvent the magic and to add a new dose of pixie dust to the park every year.

HISTORY
Over the last 60 years, the Disneyland Resort has opened its gates to over 700 million guests from nearly 200 different nations. That's almost every country in the world! Thirty-eight different languages are spoken among the 28,000 currently employed Disneyland Resort cast members. We were surprised to learn that not everything went as planned on the opening day of the Disneyland Park. Believe it or not even Disney had their fair share of problems at first, including plumbing issues, women's shoes sinking in the originally dirt roads, the heat, and so forth. But Walt was a problem solver, and he thrived in situations requiring his expertise. His mindset and ideas have been the building blocks for the company. And it is because of that there is still a park today, 60 years later, for families to enjoy a happy holiday in the magical storytelling land - exactly as Walt Disney would have wanted.

When Disneyland Park opened in July of 1955, there were 18 ticketed attractions and five free exhibits. Some main features introduced on the first day included the Jungle Cruise, Autopia, the Mad Tea Party and the Mark Twain Riverboat. Soon to follow that year were the TWA Rocket to the Moon, Casey Jr. Circus Train, and the Dumbo Flying Elephants. The King Arthur Carousel in Fantasyland debuted in 1974 but it could be considered one of the oldest rides. This traditional ride was assembled from the parts of various 19th century carousels - meaning some of the horses you can still ride today are over 100 years old! Each horse is fully restored to its original beauty every year.

HIDDEN MICKEYS
What's Disneyland without some ears? Tina made sure to pick up a pair on our travels through the park because as Walt said "I only hope that we don't lose sight of one thing, it was all started by a Mouse." So in his honor, join us on our voyage to uncover some of the most mysterious and secret Mickeys hidden all around the lands.

Tina Malave poses for a photo with Cinderella's glass slipper at Disneyland.

WALT DISNEY'S APARTMENT
When you enter into Disneyland and stroll through the Town Square, make sure to look up into the window above the Main Street Fire Department. It was there that Walt used to stay overnight during the construction of the park, and occasionally with his family until he passed away in 1966. The little but majestic apartment will always have a lamp shining in the window as tribute to the spirit of the great Walt Disney. You can even venture inside the apartment on a guided tour called "Walk in Walt's Disneyland Footsteps". To learn more, visit Disneyland's website.

DREAM SUITE
Eye on LA takes you inside the exclusive and ever-so-enchanting Dream Suite. Located in the Disneyland Park above the Pirates of the Caribbean ride, it is a private quarter for a few very lucky guests to spend the night, take a bubble bath under the stars, and be entertained by rooms that come to life. This once in a lifetime experience is now a possibility to win as a prize in the Diamond Days Sweepstakes. Keep reading to find out more about how you could relish in the magic!

DIAMOND MAD T PARTY
The celebration doesn't end in the Disneyland Park! We bounced our way over to Disney's California Adventure and hopped all the way down the rabbit hole to a different kind of party-- the Mad T Party, featuring the Mad Hatter himself! Dance to a live band playing contemporary, classic rock, and Disney tunes with a twist. There are interactive games, new photo locations, and places to kick back with a drink as you listen to the White Rabbit DJ play some hot tunes.

DISNEY CHEF'S SPECIAL TREAT
The Master Chef from Disneyland's 'The Blue Bayou' restaurant gave us a marvelous cooking demonstration in the newly opened Grizzly Peak at Disney's California Adventure. He not only makes a mean crme brule but he also has inside tips on where to find the best food that comes with a collectible souvenir.

CANDY PALACE
There is a real Candy Palace, and it's located on Main Street U.S.A in the Disneyland Park! If you need more reasons to come on down for the 60th Diamond Celebration, they are all in here. Edible diamond studded caramel apples, specialty cake pops, pecan rolls, caramel chews, oh my! The art and magic of the Disneyland candy makers can all be seen in the beautiful Candy Palace with demonstrations happening all day, every day.

Tina Malave points to the fireworks at Disneyland.

DISNEY LEGEND RICHARD SHERMAN
At the end of your day at the Disneyland Resort, when your feet are tired, your backs are sore, but your hearts are filled, Walt Disney leaves you with a final goodbye, the fireworks show. Music writer, and old friend of Walt's, Richard Sherman of the Sherman brothers, wrote a new song and dedicated it to Walt and his love for fireworks. You'll hear Mr. Sherman's song "Kiss Goodnight" at the end of the 60th anniversary "Disneyland Forever" fireworks. That is what Walt called it from day one-- the kiss goodnight, to say thanks again to everyone who came out and enjoyed the Park.

Richard Sherman and his brother Robert wrote the music for Disney classics such as 'It's a Small World' and 'Mary Poppins'. Watch Eye on LA to see an interview with Richard Sherman and hear him reminisce about his time spent working for the one and only Walt Disney.

WORLD OF COLOR - CELEBRATE!
Join Mickey Mouse and co-host Neil Patrick Harris as they take you on an adventure through the history of Walt Disney and his masterpieces. But don't be surprised if you get a little wet because this show is a magical presentation of projections, lights, and color on a giant wall of water! This show is a must see, and pulls at your heart strings in all the best ways.

PAINT THE NIGHT
"Paint the Night" is a brand new parade that pays homage to an old classic. If you grew up with the "Main Street Electrical Parade," you will certainly get all the feels after watching this new nighttime spectacular. There are over 1.5 million LED lights flowing down Main Street with new music, new costumes, and dozens of classic characters. Don't forget your magic paintbrush, because the performers will be looking to have some fun with the crowd!

DISNEYLAND FOREVER
Don't forget to hang around after the parade because the storytelling continues as it dances it way up Main Street and flies straight into the sky. The famous Disneyland fireworks have been reborn into a 360 degree show that goes from the horizon to the heavens. Get immersed in the story on Main Street, or watch Tinker Bell fly across the castle. But whatever you do, don't forget to look up!

DIAMOND DAYS SWEEPSTAKES
Eye on LA gives you some insight on what to expect from the Disneyland Diamond Days Sweepstakes. We even got you a sneak peak at one of the prizes-a hand cut crystal Cinderella glass slipper. And that's just one of the many great prizes you can win just by entering in the "word of the day" to the Sweepstakes website, or texting it to the short code 347639. The word of the day can be found in ungated areas of the Resort (areas of Resort that do not require paid admission) or at Disneyland.com/DiamondDays (the "Sweeps, Site"). The daily prizes include an overnight in the Dream Suite, private parties in the park, and personalized diamonds, just to name a few.