Molly Scargall, who owns Goo Salon in the Fairfax District, said area residents were out cleaning the extensive damage done to her shop - even before she arrived at her store early Sunday morning.
KABC
By Leticia Juarez 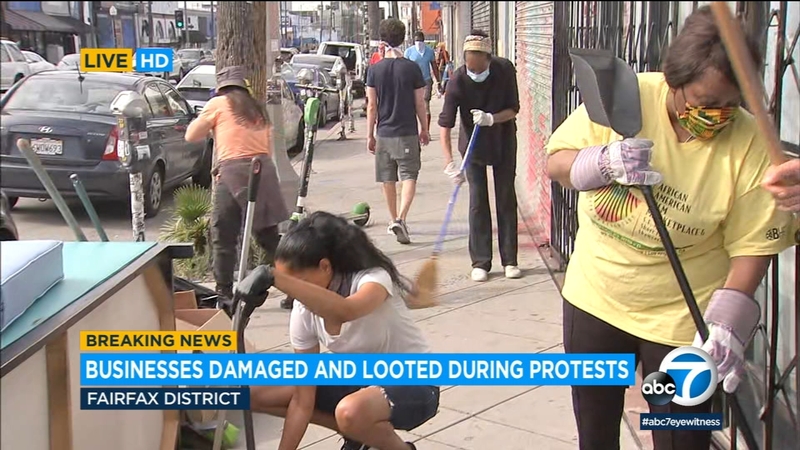 FAIRFAX DISTRICT, LOS ANGELES (KABC) -- The Fairfax District in Los Angeles was hit by looting and vandalism amid unrest sparked by the death of George Floyd. But the owner of Goo Salon, which was severely damaged overnight, said area residents were already cleaning up her store before she arrived at her shop early Sunday morning.

Many community members were seen along Fairfax Avenue with brooms in hand, helping business owners in any way they could.

"Totally in shambles, all of the windows being blown out and just all my stuff being thrown everywhere. It was hard enough to see that and watch it on the news," described Molly Scargall, owner of Goo Salon, which has been a local staple since 1999. "But what has helped me was that the community, as you can see around here, people were here before I was here. People are sweeping and cleaning and helping me."

Scargall said she was moved by the love of her community.

"If you would have seen this one hour ago, you wouldn't have believed it. So I just definitely want to thank the Fairfax community for having my back 100%. I'm here for you too, so hopefully we can get through this and we're going to open even stronger. My prayers and love to everyone who has been affected by this, and you know, we'll see how everything turns out in the future," she said.

Members of the National Guard were seen in the area early Sunday, patrolling the streets to keep the peace as cleanup was underway.


L.A. Mayor Eric Garcetti requested the manpower following the unrest. Initially, protesters led a peaceful march through the streets to protest the death of George Floyd. But as the protest ended, some turned to looting and vandalizing local businesses.

Several small businesses experienced extensive damage, including Goo Salon, which was set to reopen shortly after a long stretch of closure due to COVID-19.

"We were getting everything ready for the grand reopening. We were ready and excited. It was a super happy moment, and then to watch it all go downhill, even the protesters were so peaceful and happy in the beginning, so for it to take that turn and end this way, it's super unfortunate. But again, the community is super powerful around here, and everyone is coming together. So that's what's going to pull through and back to where we were left off even before COVID," Scargall said.
Report a correction or typo
Related topics:
los angeleslos angeles countynational guardprotestbreak inracismdestroyed businessesvandalismgeorge floydcommunity
Copyright © 2021 KABC-TV. All Rights Reserved.
More Videos
From CNN Newsource affiliates
TOP STORIES