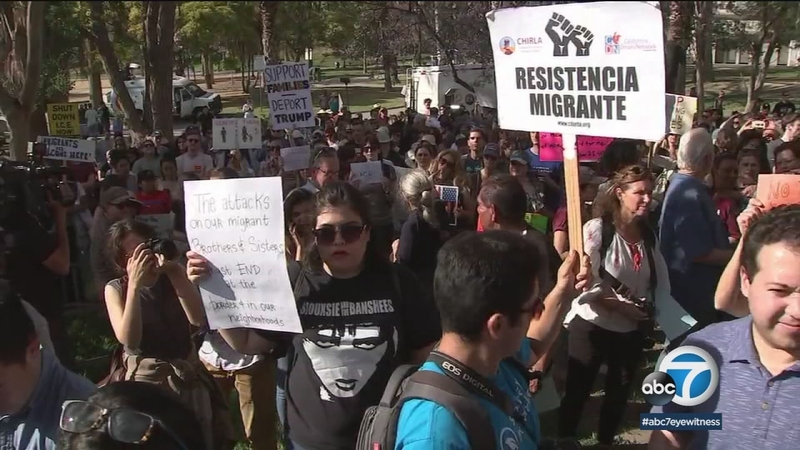 Events were organized by a group called Families Belong Together. The Los Angeles gathering took place at 5 p.m. at MacArthur Park, located at 2230 W. 6th Street.

The demonstration also took place in front of a detention center in downtown Los Angeles, where people chanted "You aren't alone" in Spanish. Detainees used flashlights to signal to those below.

"We have to say enough is enough. This stops now," protester Hector said.

About five other demonstrations were planned in the Southern California area, including one at 6 p.m. outside the federal building in Long Beach.

The marches are in direct response to the Trump administration's zero-tolerance policy to illegal immigration. Children have been separated from their families under this policy.
EMBED More News Videos

The policy continues to come under fire. On Thursday, House Republicans presented an immigration bill draft encompassing billions of dollars for a border wall, a way for young immigrants to legalize their status and a provision to address family separations.

But U.S. Attorney General Jeff Session defended the policy, even using references he said are from the Bible.

"We have an opportunity to fix an immigration system that has been broken for decades. I believe that's moral and right and just and decent," he said.

In May, Sessions called the actions even more necessary due to massive increases in illegal crossings in recent months.

"We are disheartened by the lack of leadership in Congress whose job is to be a check on the federal government when it overreaches and abuses its power," Families Belong Together stated in a press release. "We are calling for immediate reforms and an end to this barbarism."