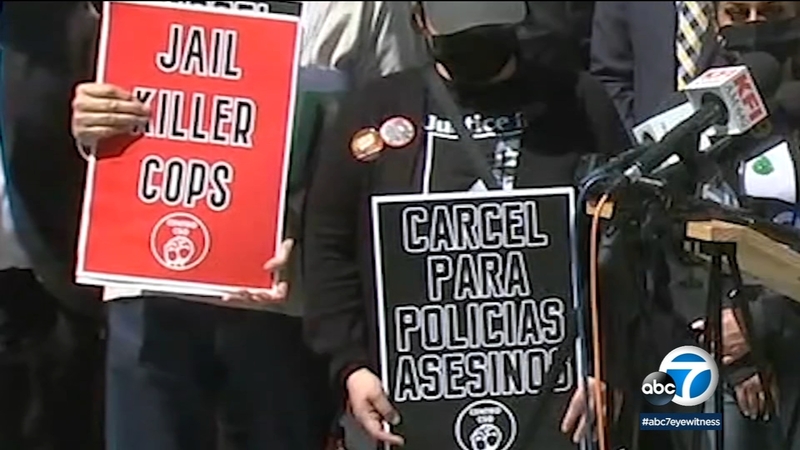 A new report issued by the National Lawyers Guild, the ACLU, Black Lives Matter and other groups claims families who protest Los Angeles County Sheriff's Department killings have been harassed by the deputies long after their loved one is gone.

"Not only did they murder my nephew and traumatize my family, but they continue to re-traumatize my family by harassing and intimidating us. We faced everything from them removing religious items at my nephews vigil to them passing by our home waving at the kids playing in the driveway. They parked in the corner of our house. They went as far as following my sister who does not live in L.A. County," said Stephanie Luna, the aunt of Anthony Vargas.

Vargas was shot 13 times by two East L.A. sheriff's deputies in August 2018 when Vargas was returning home from a party. Deputies tried to detain Vargas in connection with a robbery, but a fight broke out and deputies say Vargas reached for a gun. But the family believes it was planted by the deputies.

Ryan Twyman was unarmed and shot 34 times in June 2019. His family says they've been harassed ever since they began questioning the shooting.

"My mother goes out to visit my brother once a week -- every Thursday his grave. We've been harassed at the grave. I have pictures and videos of the sheriff waving at us, getting out, walking toward the grave. My dad asked them why they're here and they say, 'We know who you are and what you're doing here,'" said Twyman's sister, Chiquita Twyman.

On Tuesday, the L.A. County Board of Supervisors approved a motion to protect surviving families from law enforcement harassment and retaliation, even after sheriff Villanueva denied harassment taking place.

"We asked the inspector general for additional information if he had any. he had none. When you're making these statements, you have no basis and foundation to make them and disparage the good reputation and discredit the law enforcement profession and delegitimization of our efforts in the eyes of the community," said Villanueva during Tuesday's Board of Supervisor's meeting.

The board of supervisors' motion instructs the OIG to update the 2020 report on harassment by working directly with these families. And the inspector general can pursue legal options if the sheriff's department doesn't cooperate.