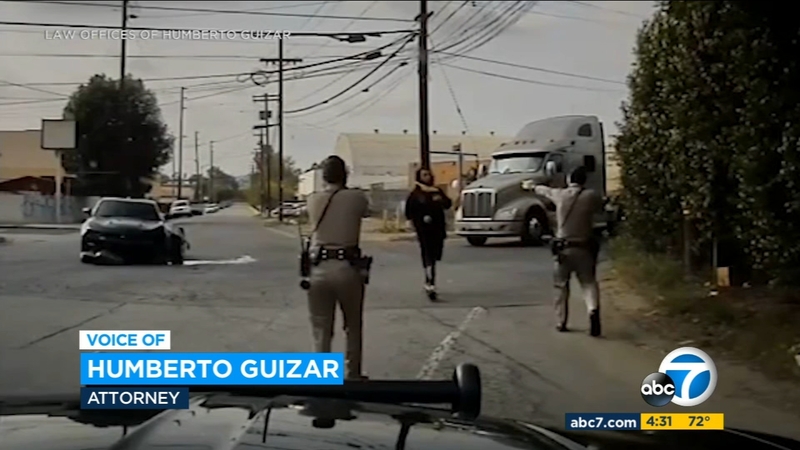 EAST LOS ANGELES, Calif. (KABC) -- The family of an unarmed man who was shot and killed by California Highway Patrol officers in East Los Angeles after a chaotic confrontation, is demanding justice and punishment for the officer who opened fire.

The confrontation between 24-year-old Leo Chavez and CHP officers, and the subsequent shooting last September, was all captured on officer dashcam video.

The Family's attorney, Humberto Guizar, released the video and says that they want to know the name of the officer who fired the fatal shot. That information hasn't been released.

"It was unjustified. He murdered my brother. He was unarmed. He was just in a non-injury car collision, and they just murdered him," said the victim's brother, Jesus Chavez.

A driver was killed in a shooting by the California Highway Patrol in East Los Angeles, authorities said.

Padilla says that her 24-year-old son was returning from the gym when he was pulled over by CHP officers. The California Attorney General's Office is investigating the shooting.

"Shot dead. With no arms, no weapon, nothing in his hands. He was murdered. This is a murder, and we're demanding that the prosecution of this case begin immediately," Guizar said.

Through their attorney, the family says they have filed legal action against the state of California. Chavez's mother says she plans on being in court if this case goes to trial.

"I think he should pay, and go to jail for the rest of his life for killing my son cold-blooded. That's why I'm asking for lots of justice. And I want to go to court and see him face-to-face and let him know that he killed me alive," said Padilla.

Eyewitness News reached out to the CHP to ask about this case. They said that the department doesn't comment on pending litigation.