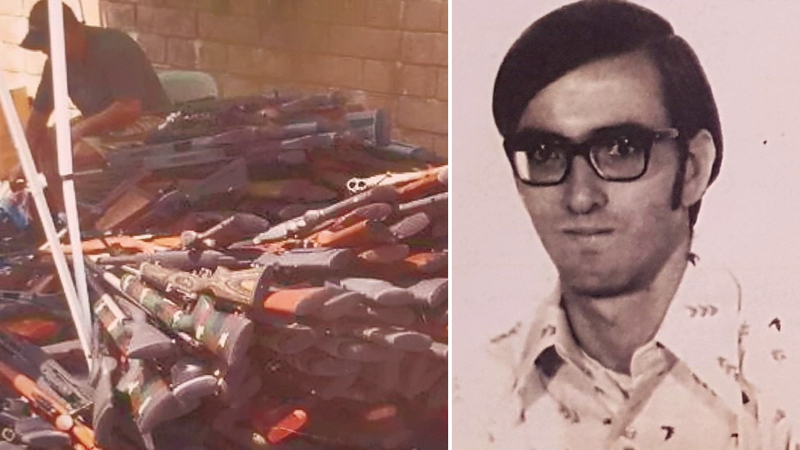 Authorities said the body of 60-year-old Jeffrey Lash was found in an SUV in June of 2015. An autopsy said he died of natural causes.

Before he died, police said Lash stockpiled more than 1,500 guns, 6.5 tons of ammunition, nearly $250,000 cash and more than a dozen survivalist-type vehicles he would never use.

Lash left no will, so his only relatives, his estranged cousins, would inherit his fortune worth approximately $5 million, according to Daniel Brookman, the attorney for the heirs.

But Brookman said the heirs would reject the inheritance to send a message against gun violence.

Lash's plans for his stockpile were unknown. A science superstar in high school, Lash was a loner who told neighbors he worked for the CIA.

The stories got even more bizarre, as Lash claimed he had a parent from outer space and that he was a hybrid alien.

While Lash had many secrets, there was no mystery about where he bought the guns. He was a regular at the Martin B. Retting gun store Culver City dealer.

All of the purchases were legally made.

The one mystery still stumping investigators is where Lash got the money to purchase all the weapons.

Police said there is no record that he ever filed a tax return or held a job.

But Lash's ex-fiance Catherine Nebron claimed it was her bankroll that paid for the guns, that the obsessive gun collector brain-washed her, "reducing her to a robot," and conned her out of her small fortune.

According to court documents, Nebron also stated that Lash said he conducted secret operations for the U.S. government, which were above the CIA, and that he had thwarted multiple attacks against the country since the Sept. 11 attacks.

Nebron's lawyer Harland Braun said he would fight the claim by Lash's relatives in a hearing set for Wednesday. Nebron is demanding that the magistrate who signed the initial search warrant to turn over the property to her as the rightful owner.

She stated she wanted to donate or sell the weapons to responsible parties.

Brookman maintained there was a larger issue at hand.