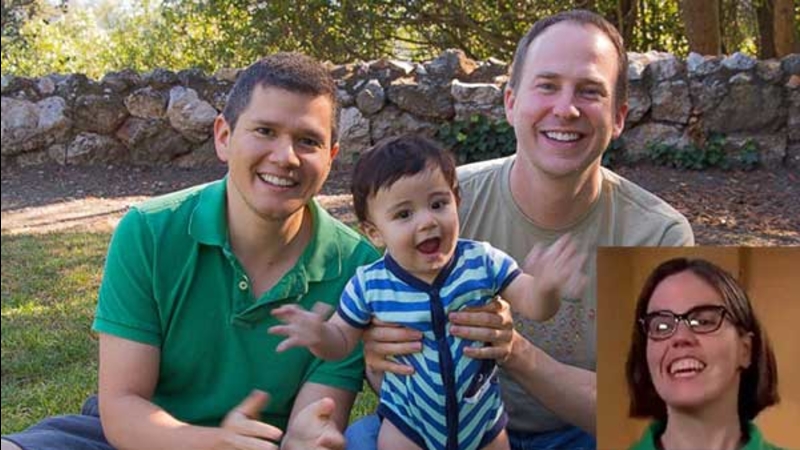 Though Esme Shaller cried tears of joy when she gave birth to baby Linus, she said that Linus never felt like her son.

"I knew it was not my child, and he never felt like my child," she told ABC News.

Shaller carried Linus as a surrogate mother, something she volunteered to do for her friends Benjamin and Eduardo Kaufmann-Malaga, a same-sex couple in California.

Though Shaller said she enjoys being pregnant, this time was different from carrying the two daughters she had with husband Gary, she told "Good Morning America."

"During the pregnancy, it was surprisingly not emotional; it was exciting and fun," she said. "I wasn't blissfully looking at my belly or anything like that."

Gary Shaller said the favor felt like the right thing for his wife to do, adding that the two couples are great friends.

The Kaufmann-Malagas also said the couples are close. They considered Mrs. Shaller an aunt and a 9-month guardian for their child. Benjamin Kaufmann-Malagas said Shaller's act has only deepened the bond by making their dreams come true.

"It was always very clear from day one that we were going to be parents," he said. "This is one in a long list of amazing things that she's done."

Whether or not the couples involved are close, there are important steps that should be taken to make sure a surrogacy runs smoothly, family lawyer Steve Mindel said.

1) Seek legal advice so everyone involved understands what's going to happen after the child is born. Know that laws vary by state.
2) Make sure that the insurances are in place.
3) Ensure that the medical team is on the same page.

The Kaufmann-Malagas and the Shallers worked with a legal team to iron out logistics. They agreed that they would use donors so the baby was not Mrs. Shaller's biological son. Both Kaufmann-Malagas donated sperm to be inseminated with half of the donor's eggs. The two only know that one of them is the father, reports Yahoo Parenting.

Mrs. Shaller agreed to go through the process for free, including all the screening to prove she was a good option. She said that everyone in her life was accepting of her choice. She even said her young daughters, 3 and 5, understood what was happening with the help of a book called "The Kangaroo Pouch."

"Basically, it was, 'Our mommy carries the baby and then the baby goes home to Ben and Eduardo,'" Shaller told Yahoo. "We just told them what was happening - you need a man and a woman to have a baby, and Ben and Eduardo don't have a woman so they need help."

Both families were happy to welcome baby Linus. Eduardo Kaufmann-Malaga said he thought the day would never come when he and his partner would have a child of their own.