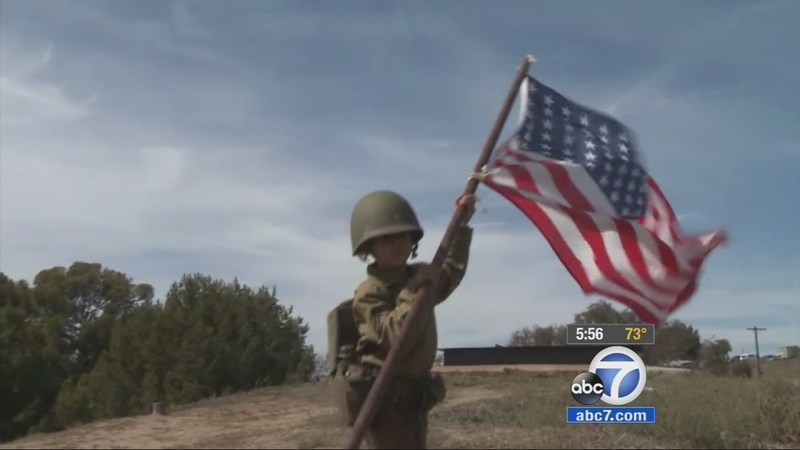 NORTH HOLLYWOOD, LOS ANGELES (KABC) -- A young cancer survivor with a wish to star in a war movie had it turn into reality, thanks to the Make-A-Wish Foundation.

A star is born: Jacob Angel, 7, is a cancer survivor, and now he's a movie star.

"Protecting Our Country's Fate" is a 10-minute movie starring Jacob, who went through his final cancer treatment just two months ago, and his brother Thomas.

Jacob wanted to be in a film about World War II.

"I really like all that big stuff of war, but I don't like that it happened," said Jacob.

Asked what his favorite part was, Jacob said: "When I stick the flag at the top of the hill, because it was like I just won the war."

And in many ways, he did.

"It was a war movie, he took the hill, he won the war, but what he really did is he won the war on cancer," said Tony Angel, Jacob's dad.

The film came together through the Make-A-Wish Family Foundation, which grants wishes to children with life-threatening illnesses.

"So happy," said Kirsten Filarsky, Senior Manager of Wishes, Make-A-Wish Foundation. "Jacob is so amazing, so is his brother Thomas. They are little actors in the making, for sure."

The film was shot in just four hours in July at the Fort MacArthur Museum in San Pedro during the Living History Event, featuring more than 1,000 war re-enactors this year, including the two very special little boys.

"I've been involved in a lot of film, television and theater projects, and it's probably the most fulfilling one I've ever done," said director Todd Witham.

"Just trying to hold it together, because I tell you, when he put the flag in the culmination of the movie at the top of the hill and saluted the flag, I got all choked up," said Jacob's father.

Jacob had a rare form of cancer called a Wilms tumor on his kidney that was removed just days after it was found. The good news is that after six months of treatment, Jacob's doctors say he is now cancer-free, just in time for the start of his new movie career.