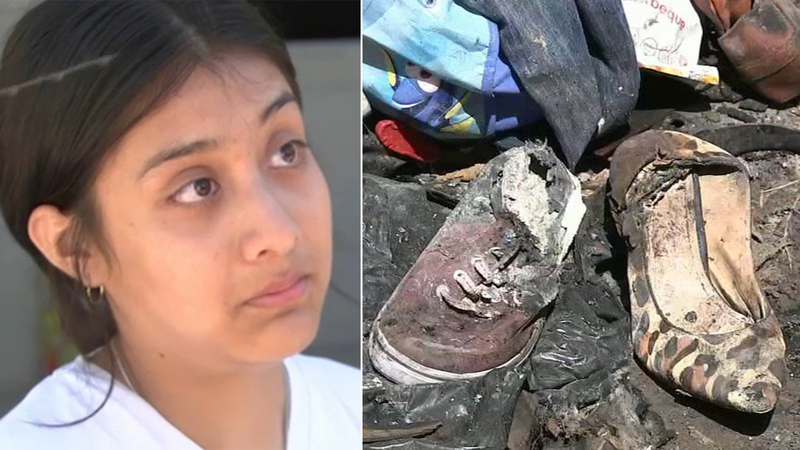 SOUTH LOS ANGELES (KABC) -- A young family whose home and possessions were burned in a fire believed to have started in a homeless encampment is now getting help from the city of Los Angeles.

Councilmember Curren Price's office said it's made contact with the family to make sure their immediate needs are being met.

The Perez family said they had contacted the city about concerns over homeless encampments in the alley right next to their home, but nothing has been done.

Thick, black smoke billowed from the alley between Lawndale Avenue and Wall Street in South L.A. on Thursday. The Los Angeles Fire Department is officially calling it a "rubbish fire."

But for 14-year old Dayana Perez, more than just rubbish went up in flames - her room caught fire. That's because the house where Dayana and her family live is right up against the alley.

It's an alley where they say homeless encampments have taken root, and the one practically up against their house is where the fire started.

"We told them that there was a possible chance there would have been a fire. They still didn't listen, and they didn't do anything and now I've lost literally everything. I have nothing. I have no type of clothes anymore. I don't have shoes," Dayana said.

The family's belongings are now spread out in the front yard -- scorched, melted, mostly destroyed.

Dayana and her father walked Eyewitness News through their burned-out home. The rear bathroom is in ruins. Dayana's bed is gone, along with most of her clothes and all of her shoes.

"I didn't buy them but my mother did, and it hurts more because I know they work hard for it. Now it's gone and I don't think that's fine, and it's not fair that no one is listening to us," Dayana cried.

The Perez family wasn't alone in seeking help from the city to remove the encampments. Steve Pag is the landlord there. He said he filed four reports with the city a month and a half ago and even rallied his neighbors.

"We do a petition and signed in the neighborhood 20 more people, but they never came and never tried anything," Pag said.

On Friday, a cable crew worked to replace lines burned by the fire. Its buckets were stretched over another encampment - all while the Perez family is left without a home.

The landlord estimates the damage at the home is about $100,000, and it may take three months to make the home livable again.

The home falls in Price's district. He told Eyewitness News Friday night that he's planning to meet with the family on Saturday and has already contacted the carpenters' union for help in getting temporary patches in place.

"Tonight, we delivered a warm meal and non-perishable foods. We extended an offer for a voucher so they can have a safe place to sleep. I'll be back in touch with them this weekend and we're ensuring that other departments step up to help. When one family is hurting, it affects us all. If you can, please consider donating," Price said in a statement.