"I don't want me being an amputee defining me. Anyone who has ever had self-doubt, I hope that that was for them. That walk was not only for me, but it was for them," said 31-year-old Karen Crespo.

More than two years ago, Crespo, a devoted nurse, nearly lost her life to a severe form of bacterial meningitis. Her arms and legs were amputated. Crespo doesn't dwell on what she can't do; she goes after what she wants.

"You're in charge of your own reality. Yes, what happened to me two and a half years ago was a horrible thing, but I have to make that negative into a positive," said Crespo.

After learning that designer Carrie Hammer featured a model in a wheelchair in one of her shows, Crespo contacted her and was invited to walk the runway.

"Once I did my first pose, everyone was smiling and clapping. That is when I said, 'I got this,'" said Crespo, who donned a red dress. "I just took it all in and I just felt for the first time in a long time, probably first time since my illness, I felt beautiful again."

Last November, a shipment containing $100,000 of prosthetic limbs was stolen off of Crespo's doorstep in West Covina. Hammer also worked to have Crespo's prosthetic arms replaced in time for the Sept. 5 show. 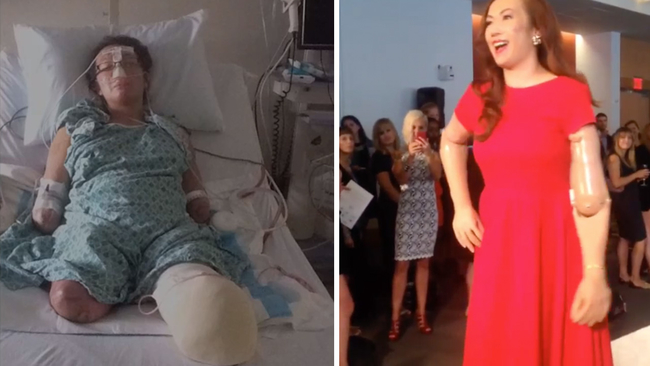