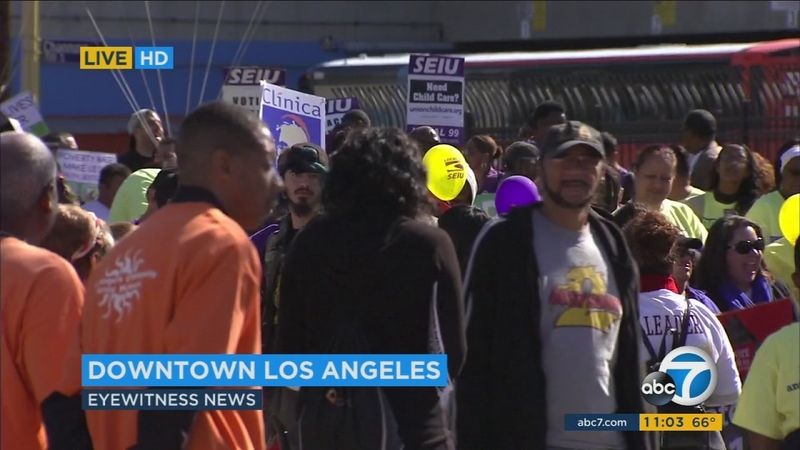 SOUTH LOS ANGELES (KABC) -- Fast-food and other low-wage workers rallied alongside union activists in Los Angeles Tuesday as part of a series of protests planned nationwide advocating for $15-an-hour pay.

The local protests, organized by the Service Employees International Union, will include fast-food, home-care and child-care workers, along with other underpaid employees.

The rallies are being held at two McDonald's restaurant locations in South L.A. and downtown L.A., and will be followed by a march to L.A. City Hall for a midday protest. Some workers will then board the buses bound for Oakland to continue marching.

The city and county of L.A. have already approved increasing the wage mark, but protesters say Tuesday's demonstrations center around bringing their voices together in support of a November 2016 ballot initiative.

Low-wage workers say they want to help shape the discourse leading up to the presidential elections next year and are seeking the support of candidates to raise the wages statewide by 2020 and guarantee full-time workers at least six paid sick days per year.

The minimum wage in California is currently $9 an hour, and that is set to increase to $10 in January.

Even though local low-wage workers will soon be receiving $15-an-hour pay, they say it's still important to fight for fellow Californians and others who may live in different cities but share the same struggles.

"They're the same as us, the same situation. Everything is going up, and it's not right," protester Fannie Velasquez said. "We're trying to get a better future for our families, not only for us. Our kids are growing up and they want to go to college, so we could afford it and give them a better future."

There will be hundreds of protests nationwide Tuesday in 270 cities across the country, including New York, Florida, Ohio and Virginia. Organizers say it will be the biggest strike in the fast-food industry.