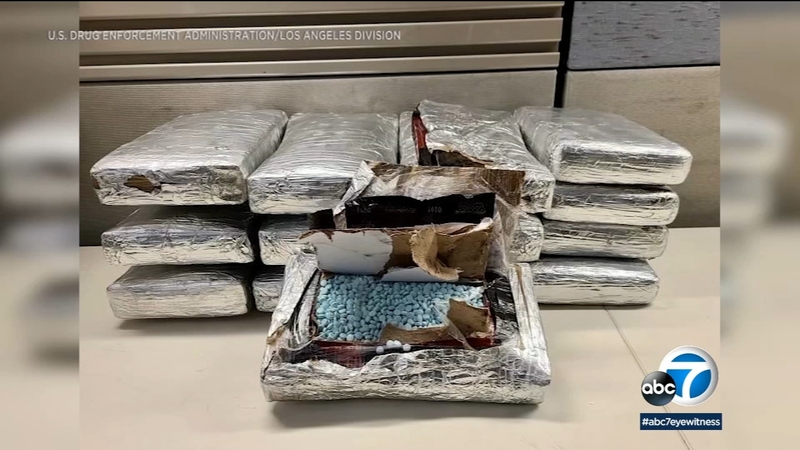 At an afternoon news conference, investigators displayed some of the thousands of opioid pills that were seized when they went after the 12 suspects. They're accused of selling the pills that contained fentanyl, which led to the overdose deaths of 12 people.

The suspects were taken into custody throughout Southern California, including the South Bay, Orange and Ventura County and the Inland Empire.

"Fentanyl is increasingly being seen in what customers think are drugs like cocaine and oxycodone," Acting U.S. Attorney Tracy Wilkison said. "Most of the victims in these cases had no idea they were taking fentanyl - and it cost them their lives."

The cases announced Thursday date as far back as November 2016 when Sean McLaughlin was working at American Junkie in Newport Beach and distributed a fentanyl-like substance that led to three ODs and one death at the club, prosecutors said.

McLaughlin, 47, was originally charged by Orange County prosecutors, but federal prosecutors recently took over the case, which carries a stiffer sentence in federal court. His lawyer didn't immediately return a message seeking comment.

Another case involved a 15-year-old boy who died a year ago after buying what he thought was oxycodone, according to Snapchat conversation with the alleged dealer, prosecutors said.

According to the Drug Enforcement Agency, the counterfeit pharmaceuticals were manufactured in Mexico and distributed in Southern California. The dealers used social media and the U.S. Postal Service to get the drugs to their customers.

Federal and local law enforcement worked together as part of a task force created a few years ago to go after the street level dealers.

One defendant, William Fulton, 39, is charged with two deaths over subsequent days in October. Prosecutors said he sold fentanyl to two people staying at hotels in Redondo Beach. The victims were listed only by their initials D.S. and A.L.

Fulton, who has two dozen felony convictions, including burglary, car theft and drug possession, is currently in state prison. It wasn't immediately clear if he had a lawyer who could comment.

Another suspect, Jason Soheili, 26, is accused of mailing a fatal dose of fentanyl to a man who had moved to Utah last fall to go to rehab, but had dropped out of the program in January. The victim, who died Feb. 21, was not identified in court documents.

A public defender for Soheili did not return a message seeking comment.

An affidavit for Soheili's arrest includes text exchanges with the alleged victim. In one, when asked if he could provide a powder form of fentanyl, Soheili indicated he could and said: "just dont die ... lol."

Federal law enforcement officials said they hoped the announcement of the arrests would curb the sale and use of fentanyl.

"A lot of these people don't know they're taking fentanyl, but out there the risk is gigantic that they are," Wilkinson said, "And I think it's my fervent hope that this does curb the uses and frankly deaths in the future."

If convicted, 11 of the 12 suspects face a mandatory 20-year sentence in federal prison. The other defendant, because of previous drug convictions, faces life in prison.