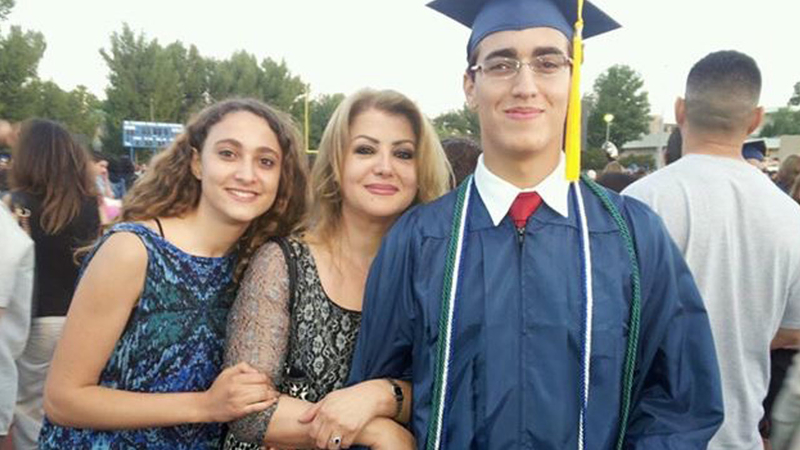 LONG BEACH, Calif. (KABC) -- A 20-year-old man was shot and killed by Long Beach police Wednesday night after allegedly jumping out of a second-floor window and threatening an officer.

Feras Morad of Woodland Hills was fatally shot in the 4600 block of East 15th Street near Pacific Coast Highway around 7:30 p.m.

Police say Morad, who appeared to be intoxicated and under the influence of drugs, was acting erratically. He allegedly got into a physical altercation with a few of his friends before police arrived on scene.

"When they tried to restrain him, he broke loose and jumped through the glass of a second-story window," Long Beach police said in a statement.

A responding police officer spotted three people in an alley, and as he began to exit his patrol car, Morad began to walk quickly toward him. Morad was covered in blood and appeared to have a large cut on his body, police said.

The officer allegedly told him he was there to get him medical aid, but Morad "advanced more rapidly toward the officer" and ignored the officer's verbal commands to stop, police said.

"During the next few minutes, the officer utilized verbal commands, an electronic control device, an impact weapon and physical force to gain compliance but was unsuccessful," according to the police statement.

When Morad again advanced toward the officer and told him he was going to attack him, an officer-involved shooting ensued.

Morad was transported to a local hospital, where he was pronounced dead.

Friends and witnesses said Morad was not attacking the officer, but that he was in need of medical attention.

"He was in a state of utter distress like he didn't know where he was and he kept moving toward and wasn't responding to the officer. The officer used the Taser, but it didn't hit or wasn't effective," his friend Ryan Fobes said.

Morad was a nationally-ranked debater at El Camino Real Charter High School and at Moorpark College. His family said the debate champion dreamed of becoming an attorney who would represent people in police brutality cases.

Friends said he was studying with his debate partners when he took some mushrooms and had a severe reaction to the hallucinogen. After he jumped out of the second-story window, his friends called 911 for help.

"The next thing after trying to use the Taser was to pull out his gun. We were saying, 'Don't shoot! Don't shoot, he's not armed!' Feras was shirtless and covered in blood and obviously very hurt," Fobes said.

His loved ones have set up a GoFundMe account to help his family pay for funeral arrangements.

"Feras was just stepping into his adulthood, and yet he had already touched countless lives with his kind and loving heart," a statement on the GoFund Me website says. "They say it takes a village to raise a child. The village is needed now."

They say it was clear Morad was unarmed and that there was no need for the officer to fire his gun. His family members said they plan to sue the Long Beach Police Department.

On Wednesday, June 3, a candlelight vigil will be held for Morad at Warner Center Park in Woodland Hills at 8 p.m.

The Los Angeles County District Attorney's Office and the Long Beach Homicide Detail are investigating the shooting, which is routine protocol following all officer-involved shootings in the city of Long Beach.