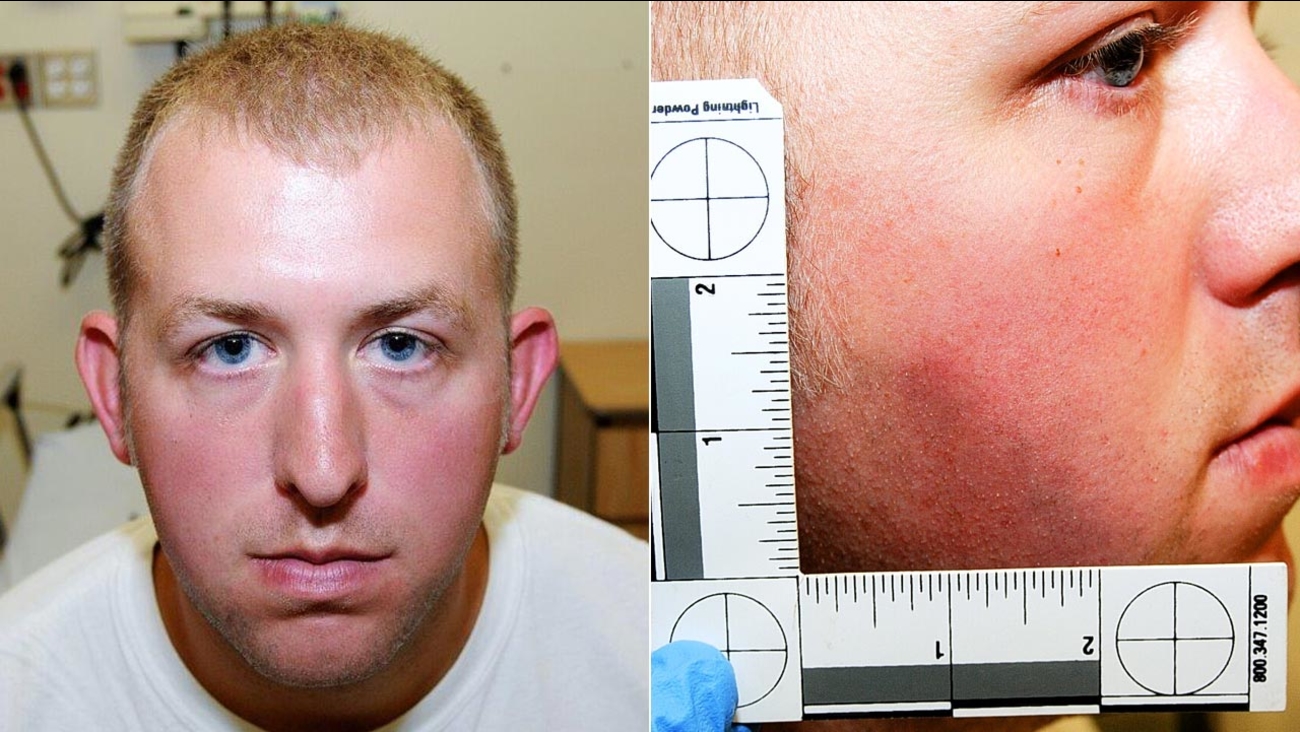 Evidence from the investigation was released Monday night after the announcement was made by St. Louis County Prosecuting Attorney Robert McCulloch.

Wilson was interviewed by a detective the morning of Aug. 10, the day after he shot Brown.

The following are excerpts from that interview.

(Please note: Text is as it appears in testimony.)

WHEN HE FIRST SAW BROWN

DW: "I had heard on the radio that there was a stealing in progress from the Ferguson Market on West Florissant. I head a brief description of black male with a black t-shirt. Um, as I was driving out down Canfield westbound I observed two black males walking in the center of the roadway on the center yellow line."

Wilson told the detective that when he told them to move to a sidewalk, Brown responded with an expletive.

Wilson then noticed that Brown had a handful of cigars, "and that's when it clicked for me," he said, referring to a radio report minutes earlier of a robbery at a nearby convenience store.

DW: "So I'm right at the intersection. Um I back up ten feet I go to open my door, say 'Hey, come here.' He said, 'What the ---- are you gonna do?' And, he shut the door on me. A, the door was only open maybe a foot. I didn't have chance to get my leg out. I shut the door and he came up and approached the door. I opened the door again trying to push him back tell him to get back. Um, he said something. I'm not sure exactly what it was and then started swinging and punching at me from outside the vehicle."

DET: "How is he assaulting you?"

DW: "The first time he had struck me somewhere in this area but it was like glancing blow 'cause I was able to defend a little bit. Um, after that he, I was doing the just scramblin' trying to get his arms out of my face and him from grabbin' me and everything else."

WHAT HE TRIED TO DO BEFORE FIRING AND WHY HE FIRED

DW: "I tried to go for my mace, I couldn't reach around my body to grab it and I know how mace affects me so if I used that in that close proximity I was gonna be disabled per sec. And, I didn't know if it was even gonna work on him if I would be able to get a clear shot or anything else...I don't carry a taser so that option was gone and even if I had one with a cartridge on there, it probably wouldn't have hit him anywhere."

DW: "Um, I thought I was already compromised enough. I drew my firearm, I pointed at him...'stop I'm going to shoot you is what I ordered him to get on the ground.' He said, 'you're too much of a ----ing ----- to shoot me' and grabbed my gun. When he grabbed my gun, he twisted it, pointed at me and into my hip, pelvic area."

DW: "Um, I know his hand was around my trigger finger which was inside the trigger guard. Um, and when he grabbed it he pushed it down and angled it to where it was like this in my hip."

DW: "At that point, I was guaranteed he was going to shoot me. That's what I thought his-his goal was. He had already manipulated I was not in control of the gun. I was able to tilt myself a little bit and push it down and away towards the side of my hip and kinda lock my wrist into my leg to where he couldn't get it back up 'cause I did not have enough strength to come up and force him off of me."

DW: "He was-he had me completely overpowered while I was sittin' in the car."

DW: "His fingers were over in between from the hammer and the slide preventing it from firing. Um, I tried again. It fired. When it fired, my window had been down the entire time. Glass shot up. The first thing I remember seeing is glass flyin' and blood all over my right hand on the back side of my hand."

DET: "Okay, and you said you shot that second time, right? Where did that round...did you shoot that round through...at the door or the window, or...?"

DW: "After I said on the radio, 'Shots fired. Send me more cars,' I was yelling at him to stop and get on the ground. He kept running and eventually he stopped in this area somewhere. When he stopped, he turned, looked at me, made like a grunting noise and had the most intense aggressive face Ive ever seen on a person. When he looked at me, he then did like the hop...you know like people do to start running. And, he started running at me."

DW: "During his first stride, he took his right hand put it under his shirt and into his waistband. And I ordered him to stop and get on the ground again. He didn't."

DW: "After I fired multiple shots I paused for a second, yelled at him to get on the ground again, he was still in the same state. Still charging hands still in his waistband, hadn't slowed down. I fired another set of shots. Same thing, still running at me, hadn't slowed down, hands still in his waistband. He gets about eight to ten feet away, he's still coming at me in the same way. I fired more shots. One of those, however many of them hit on him in the head and he went down right there."