How did the Suez Canal cargo ship get stuck? What we know about blockage, effect on supply chain Inside race to remove cargo ship from Suez Canal

SUEZ, Egypt -- A giant backhoe and a squadron of tugboats look minuscule against the cargo ship's bulk, demonstrating the enormity of the challenge at hand: freeing the wedged, skyscraper-sized container ship that has blocked the entire width of the Suez Canal and created a major traffic jam on one of the world's most crucial trade routes.

The tugs and diggers toiled on Thursday as over 150 vessels carrying goods to destinations across the world on tight schedules remained trapped on either end of the canal, which links the Mediterranean and Red Seas.

Over its 150-year history, Egypt's Suez Canal has seen wars and crises - but nothing quite like the stranding of the Ever Given.

How did this happen?

That remains murky. The vessel entered the canal from the Red Sea on Tuesday morning and ran aground 45 minutes later.

The ship's operator and Egyptian officials blamed winds gusting as much as 50 kilometers per hour (30 miles per hour), along with a sandstorm sweeping the area.

Cargo ships have grown in recent years to take on more containers as fuel prices have risen because big boats burn less fuel per container moved. Some have wondered if the ultra-large size of the Ever Given was a factor.

While the supersize of ships can increase their risk of running aground in the Suez Canal, boats just as big buffeted by winds just as strong have passed through the waterway without incident before.

Instead, it's likely that "a combination of factors" was at play, said Ian Woods, a marine cargo lawyer and partner with the firm Clyde & Co.

"There's the exposure to the elements, potential for a loss of power, potential for steering problems," Woods said. "We'd expect a full investigation."

The obstruction could prove embarrassing for Egypt, where the waterway long has been a symbol of national pride. President Abdel Fattah el-Sissi poured $8.2 billion into a lavish expansion of the canal that was unveiled in 2015. However, the Ever Given got stuck just south of that new section.

How will they fix this?

So far, dredgers and tugboats haven't been able to free the ship. An expert salvage team, whose job it is to respond to boat-related disasters, flew from the Netherlands to the canal on Thursday to join the efforts.

Already, it seems the ship's massive weight, some 220,000 tons, could make it impossible to dislodge and float. To lighten the load, the team says it may have to remove at least some of the ship's containers and drain the vessel of the water serving as ballast before further dredging the area and then trying again to nudge the ship using tugboats.

Officials had indicated initially they didn't want to do that because the unloading itself could take days or weeks.

How vital is the canal to shipping?

About 10% of all global trade flows through the 120-mile-long (193-kilometer-long) canal, which allows tankers and container ships to avoid a long trip around the southern tip of Africa.

The iconic shipping journal Lloyd's List estimates that goods worth $9.6 billion pass through the canal every day. Lloyd's says about $5.1 billion of that traffic is westbound and $4.5 billion is eastbound.

About one-fourth of that traffic is on container ships - like the one that is currently burrowed into one side wall of the canal. Lloyd's says more than 50 ships traverse the canal on an average day, carrying 1.2 billion tons of cargo.

What effect will this have on supply chains?

When it comes to shipping goods from Asia to Europe, there are virtually no alternatives such as rail or truck transportation, said Sharat Ganapati, an economics professor at Georgetown University. The blockage will delay a range of parts and raw materials for European products such as cotton from India for clothes, petroleum from the Middle East for plastics, and auto parts from China, he said.

"The fact that you have the most pivotal node in the trading network being blocked is going to have important welfare effects around the world," said Woan Foong Wong, an economics professor at the University of Oregon.

There will be less direct impact on the United States, which receives most shipments from Asia on the West Coast. Still, imports from Europe may be delayed, and the blockage will prevent empty shipping containers from being returned to Asia, adding to a container shortage caused by rising demand for consumer goods during the pandemic.

"If you get a bump in one place, that is going to percolate through the system," Ganapati said. "It is going to take a while to get things un-gummed up."

Is the supply chain in trouble?

The Suez situation could compound issues for a supply chain already under pressure from the pandemic and a surge in buying.

Virus-related restrictions have trapped crews on merchant ships. Congested ports have led to container ships anchoring off the California coast, unable to dock and unload their goods. Shortages of semiconductors and rare-earth elements have plagued manufacturers of cars and other consumer products.

"We have lots of things indicating a vulnerable supply chain at risk for disruptions, and now you put one more thing on top of that," said Julie Swann, a logistics expert at North Carolina State University.

How will consumers be affected?

It's possible that U.S. consumers will feel some impact if shipping is disrupted for more than a few days. Finished products from Asia to the United States go over the Pacific. However, some components for products that are assembled in Europe and shipped to the U.S. could be delayed by the canal closure.

Mark Zandi, chief economist at Moody's Analytics, said the canal blockage likely won't have much impact on the U.S. or global economies unless it drags on for weeks or months.

Germany's economy could suffer, though, if the blockage delays the shipment of auto parts to that company's large car manufacturers, Zandi said.

And Spain, Italy, and France could see higher gas prices because they rely on oil shipments through the canal, Ganapati said.

What about oil shipments?

Jim Burkhard, who heads crude oil research at IHS Markit, said the impact on the global oil market will be limited if the canal is cleared soon. Energy demand is still weak due to the pandemic, and the Sumed pipeline has unused capacity to move oil around the canal, from one end near Alexandria, Egypt, to a terminal near the Red Sea.

"If this were to last a month, there are other options - you can sail around Africa. Of course, that would add cost," Burkhard said. "If this ship is moved in the next week, it will be a footnote in history when it comes to the oil market."

The price of benchmark international crude rose after the blockage, but prices retreated Thursday. Analysts attributed the price drop to an industry group's report of large U.S. inventories and concern that pandemic-related lockdowns in Europe will further dent demand for energy - outweighing concern about the stuck ship.

Could oil-related products be slowed?

Shipments of Europe-bound refined petroleum products such as gasoline and jet fuel also go through the canal, and they will be delayed. Burkhard said refineries in Europe could be pushed to temporarily increase production to pick up the slack, Burkhard said.

Tankers using the Suez carry 8% to 10% of the world's liquefied natural gas, according to research firms. Wood Mackenzie analyst Lucas Schmitt said only a few LNG shipments were near the canal when the blockage occurred.

"We don't expect major bottlenecks unless the situation drags on," Schmitt said. He added that the timing of the incident - it's spring, when LNG demand typically eases - means it will have less impact on prices than recent delays at the Panama Canal had. Those delays caused LNG shipping rates to surge, according to data from S&P Global Platts Analytics.
Report a correction or typo
Related topics:
personal financeeconomyu.s. & worldtrade
Copyright © 2021 by The Associated Press. All Rights Reserved.
TRADE 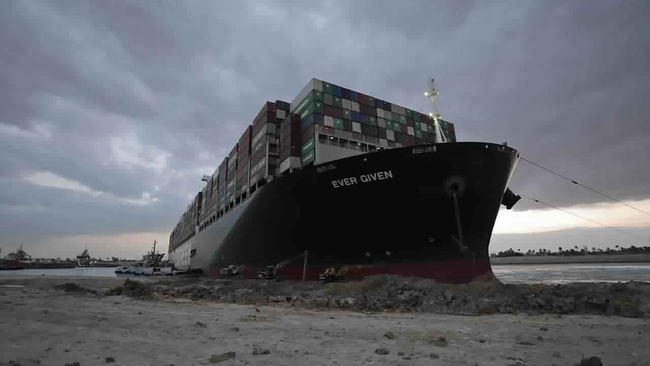 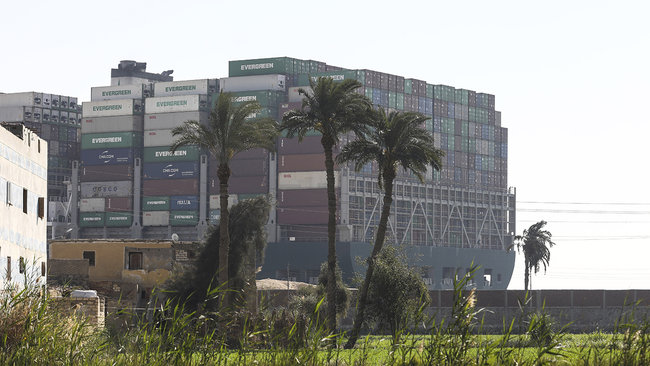