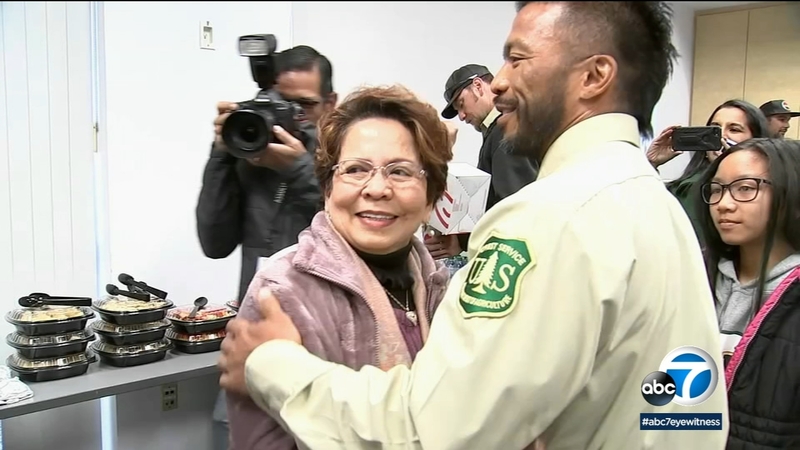 The 20 Angeles National Forest firefighters, who all have five to 10 years experience, volunteered to deploy on Jan. 6 to assist the Victoria Rural Fire Service, according to the USDA's Nathan Judy and Forest Service spokesman Andrew Mitchell. They received a standing ovation after arriving in Australia.

"It was long, it was good. First couple weeks were pretty busy...then we got some rain and helped us out," firefighter Tony Blanco said. "We're there to do a job, and everyone is very appreciative. The public and all the firefighters there were great."

Fire tornadoes formed on Kangaroo Island as wildfires continued to rage across Australia. Brenton Davis, who shot video of one of the firenadoes, said the area "had a fair few of them today and it wasn't even a hot day."

Firefighters said they found several similarities to the blazes they battle in Southern California.

"There weren't any surprises with it, it was very easy to assimilate with what they have going on over there and work with them and get some production," Jonathan Merager said.

The firefighters reunited with loved ones at the Los Angeles Fire Department's Station 5 on Wednesday morning after flying into Los Angeles International Airport.

The appreciation continued back home, but some were hoping for more than just a hug.

"I asked him to bring me a koala bear and Chris Hemsworth," Starlyn Merager said. "I hope he's on the buggie somewhere."

The group of volunteers also learned a few things while Down Under.

"They made a lot of good friends and built a lot of good relationships," Chief Robert Garcia said. "They found a lot of similarities, tactics and tools. There's always local nuances in each part of the country, even here. So no big surprises, but they were pretty impressed upon how large the scope and scale of the wildfire situation is there."

Fires across southern Australia have claimed at least 33 human lives and millions of animals since September, destroyed more than 3,000 homes, and scorched more than 26.2 million acres.

More than 200 firefighters from federal agencies have been sent to Australia to fight the bushfires for the first time since 2010, according to the National Interagency Fire Center. Firefighters from Australia previously deployed to Northern California in 2018 to help with wildfires.