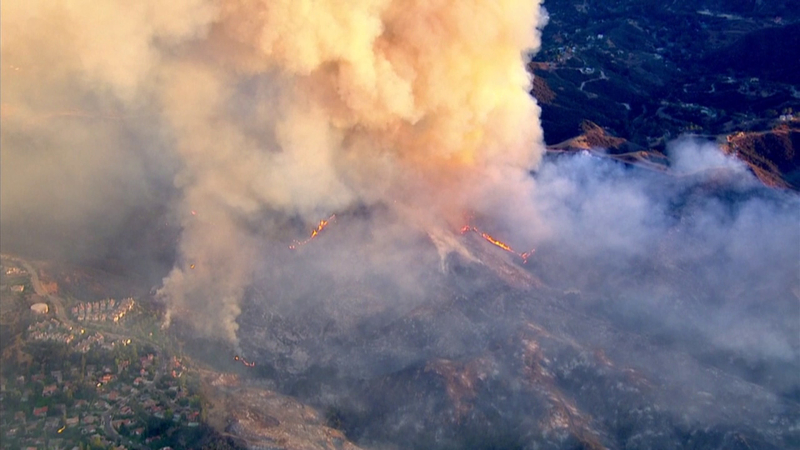 CALABASAS, Calif. (KABC) -- Crews were responding to a raging 500-acre brush fire in Calabasas that threatened thousands of homes and buildings on Saturday.

The Los Angeles County Fire Department responded to the fire at about 4:10 p.m. Capt. Keith Mora stated the initial call was for a car crash into a power pole with power lines down. Firefighters in the field reported seeing power lines down also.

Deputies with the Los Angeles County Sheriff's Department said a black truck struck a pole in the 2300 block of Mulholland Highway. Witnesses told investigators the truck was speeding before it hit the power pole, knocking it over and causing a transformer to explode, sparking the fire.

Fire officials stated Camp Wildcraft, a new campground set to open for the first time on June 13, appeared to be a complete loss.

Shari Davis of Camp Wildcraft said while the camp portion may be heavily damaged, the oldest home in Calabasas, the Masson Residence, was saved by firefighters.

The California Highway Patrol announced that Topanga Canyon Boulevard between the Pacific Coast Highway and Cezanne Avenue would be closed until further notice.

Ashes from the fire were reported in North Hollywood and Burbank, and even as far as Arcadia.

Can see the fire in Agoura @ABC7 #abc7eyewitness pic.twitter.com/GUmUecOfhV