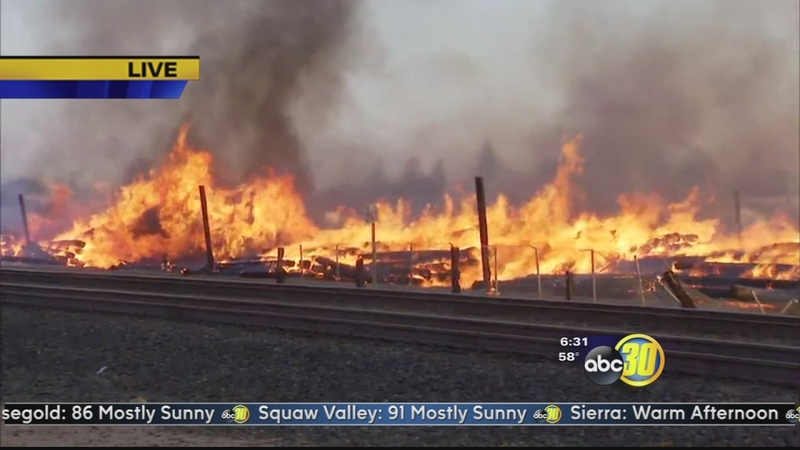 FRESNO, Calif. (KABC) -- Investigators are trying to figure out what sparked a massive fire at a utility pole yard in Northwest Fresno on Thursday.

The blaze, which started just before 4 a.m., continues to burn at the McFarland Cascade yard off Golden State north of Ashlan Avenue.

PHOTOS: Flames chew through power poles along freeway in Fresno


Intense flames and smoke filled Northwest Fresno as stacks of utility poles burned one after the other. The flames could be seen for miles in the dark of the morning, and the poles burned with such intensity that motorists along a nearby street said they could feel heat radiating through their windshields.

"I seen the huge smoke and I was like, this is something I don't see everyday," said Eric Salinas, Fresno resident.

Several fire crew rushed to the business and saw the intensity of the fast moving fire.

"The crew arrived and determined there was 15-plus piles of power poles burning at the time. And without an adequate water supply they determined they were going to go into a defensible operation mode," said Lawrence French, spokesman for the Fresno Fire Department.

This is where PG&E and other utility companies buy their power poles. pic.twitter.com/rcJaVK9LlC

Between 400 and 1,000 wooden power poles owned by Pacific Gas and Electric on the two-acre yard are either burned or threatened, Fresno Fire Department spokesman Pete Martinez said. Damage is estimated at $1.3 million, and its cause is under investigation, he said.

French said the industrial area did not have many fire hydrants, creating a major challenge for firefighters. They were able to use two hydrants northeast of the fire and extended hoses to keep water flowing, so they could keep the fire from spreading to nearby businesses and keep the smoke from harming residents.

Firefighters are pumping up to 3,000 gallons a minute to douse the flames amid a historic drought in California that is forcing water restrictions on residents.

"It effects us as in we don't want to waste water like every other member of the community, however right now we're having to balance the risk to the environment, as a result of the release of pollutants, from the column of smoke that will be rising throughout the day."

At least two dozen firefighters working from a dozen trucks and engines are fighting the fire.

There are no reports of injuries, and the closest homes are 2 to 3 miles away, Martinez said.

The fire may periodically affect air quality in Fresno, Kings, Tulare and the valley portion of Kern counties, the San Joaquin Valley Air Pollution Control District said. A "health caution" is in place until the fire is extinguished.

The fire will generate fine particulates that can cause problems for people with respiratory conditions, young children and elderly people, the air district said.

"It's one of those things where any smoke is hazardous but the winds are blowing a lot of the smoke into the atmosphere," Martinez said.