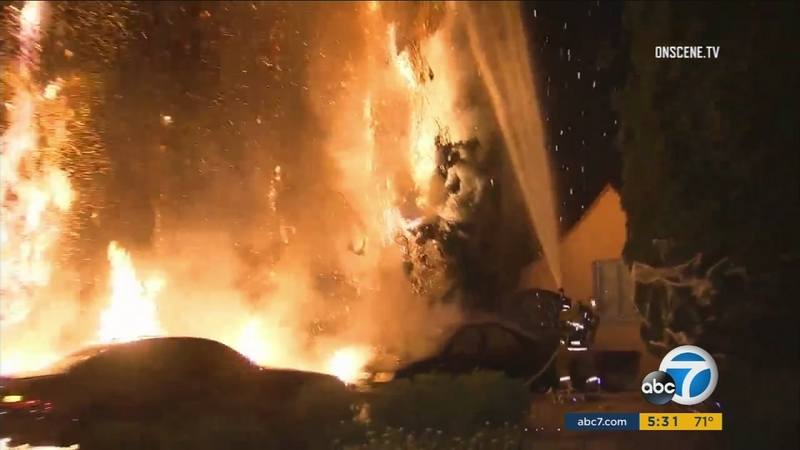 Firefighters responded to blazes at four separate locations, at least two of which involved vehicles and towering trees.

The first blaze was reported at 5:35 a.m. in the 5900 block of N. Carpenter Avenue, where cypress trees and one car caught fire.

The second fire was reported at 5:46 a.m. in the 5900 block of N. Irvine Avenue, where cypress trees, a palm tree and two cars caught fire.

The third blaze was reported at 5:50 a.m. in the 11600 block of W. Oxnard Street, but when fire crews arrived on scene, they did not see any active flames.

The fourth and last fire was reported at 5:53 a.m. in the 5700 block of North Beck Avenue, where cypress trees and cars caught fire.

A series of small but suspicious fires erupted Thursday morning in North Hollywood, prompting an investigation by Los Angeles police.

The fire on Beck Avenue was the most destructive - four trees and three cars in the driveway of a home were charred before firefighters extinguished the flames.

Because the fires occurred in close proximity - both in time and location - the Los Angeles Fire Department's Arson Section was investigating the incidents, officials said.

A resident who lives on Beck Street claims to have surveillance video showing a person on a bicycle riding up to the scene, lighting something and then throwing it into the trees. Authorities are looking at that footage to aid their investigation.

Though no one was injured and the fires did not spread to any structures, residents living near the blazes said it was a very scary situation.

"My first reaction was to grab a garden hose," said area resident Steve Fine, who described watering down his wooden roof before his home and his immediate neighbors' homes were evacuated by police.

"Maniacal nihilism. Somebody just wants to go ruin somebody else's day. So it's an intense drag for me, but I hope that nobody else gets hurt and they catch this fool, and get him mental help, man. He's clearly deranged," said Jordan Rippe, another area resident.

Authorities are looking into previous fires that were set in the area a few weeks ago. They are not saying they are connected to the recent fires, but they are trying to figure out if they're related in any way.

No description of a possible suspect was immediately released by authorities.