Named the Pine Fire, the blaze triggered a massive response, including fixed-wing aircraft.
KABC
By Veronica Miracle and ABC7.com staff 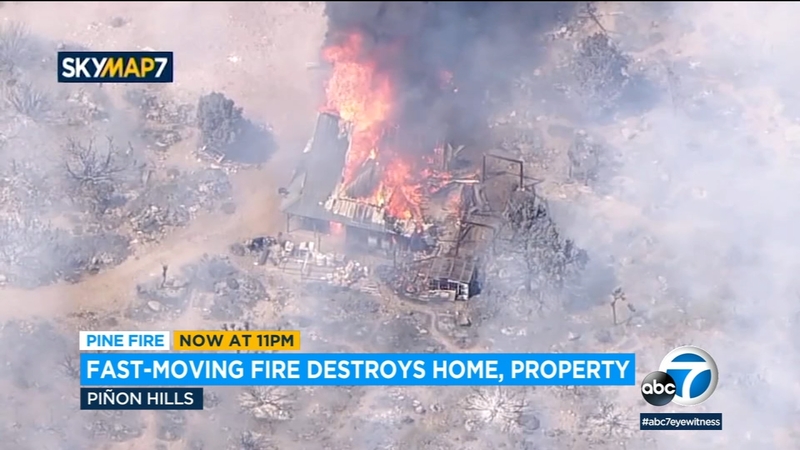 LLANO, Calif. (KABC) -- Firefighters were gaining control over a brush fire that destroyed at least two homes and triggered evacuations as it spread to at least 450 acres in the Antelope Valley community of Llano.

The Los Angeles County Fire Department tweeted around 6:30 p.m. forward progress of the blaze was stopped. Containment was at 15% by 8 p.m.

The Pine Fire, named for Pineview Road, was first reported just before 2 p.m. in the area near Highway 138 and 248th Street East. It was initially estimated at 15 acres but spread in chaparral and light breezes to 140 acres within about an hour and continued to grow.

By early evening firefighters appeared to have a good handle on the blaze, which was still generating smoke but few active flames.

Firefighters were battling a brush fire that destroyed one home and threatened others as it spread to at least 140 acres in the Antelope Valley community of Llano.

Evacuations were ordered for this area: Highway 138 south to Pineview Road and Buchanan Road east to Smoke Tree Road. Residents were seen packing up belongings and corralling horses in the area.

About 100 people had evacuated.

The blaze triggered a three-alarm response including helicopters and fixed-wing aircraft dropping Phos-Chek.

No injuries have been reported but at least two homes were seen fully involved in flames.