210 and 15 freeways reopen after brush fire in Rancho Cucamonga 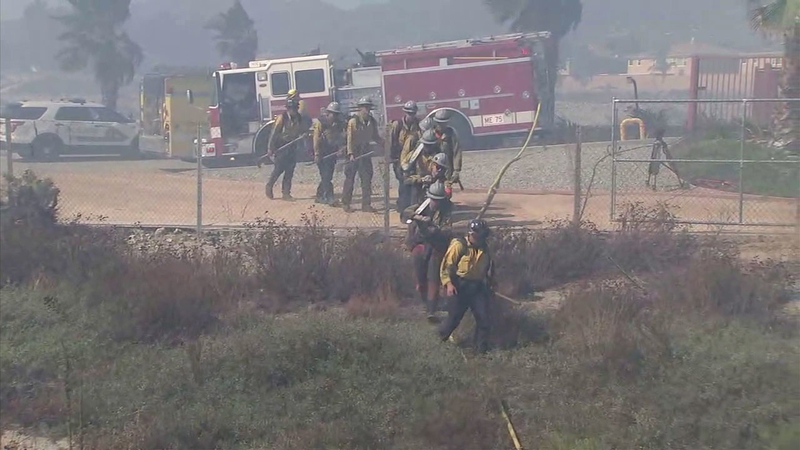 The flames erupted shortly before 11 a.m. and were burning near the interchange of the two major freeways. The California Highway Patrol closed the eastbound 210 at Archibald Avenue, while westbound traffic was halted at the 15. The 15 was shut down in the northbound direction.

The freeways were reopened later in the afternoon, but the connectors between the two remained closed for the staging of fire equipment and traffic remained heavy.

There were no immediate reports of injuries in the fire, which had burned 15 acres as of 12:30 p.m., according to the Rancho Cucamonga Fire Department.

Firefighters from multiple agencies attacked the fire on the ground while helicopters performed water drops from overhead.

The cause of the blaze, which erupted amid 97-degree heat and arid conditions, was unknown.

With high winds and hot dry conditions, there were several other smaller fires in the area. Some hedges near a residence and a car were both spotted on fire in separate locations in the region of the brush fire.

While firefighters reduced the brush fire to hot spots, they cautioned that the red flag conditions remain dangerous.

"It's only going to get worse throughout the day," said Capt. Lucas Spelman, with CAL Fire Riverside County. "The heat and the humidity is atrocious right now. It's ready for the fires to be explosive."

Most of Southern California, including Riverside County, remains under a red flag warning due to a record-breaking heat wave and strong Santa Ana winds.

Temperatures in the Inland Empire was expected to hit a high of 102 on Tuesday, with conditions remaining dry. Sustained winds could reach up to 35-40 mph.

Earlier Tuesday, firefighters responded to a small blaze in Jurupa Valley near the Santa Ana River as the Southland continued to see soaring temps and strong winds.

Firefighters responded to a small blaze in Jurupa Valley near the Santa Ana River as the Southland continued to see soaring temps and strong winds.

That blaze was first reported at a lumber yard around 7:10 a.m. near Van Buren Boulevard and Clay Street. The fire spread to surrounding brush, charring approximately 5 acres

Helicopters conducted water drops and 165 firefighters were on scene to battle the flames and prevent them from spreading.

Fire crews are seen near a lumber yard in Jurupa Valley, where a fire broke out on Tuesday, on Oct. 24, 2017.

There were no reports of any injuries.

The cause of the initial blaze was not immediately known.

Riverside County sheriff's officials shut down Van Buren Boulevard between Jurupa Avenue and Clay Street due to the firefight.