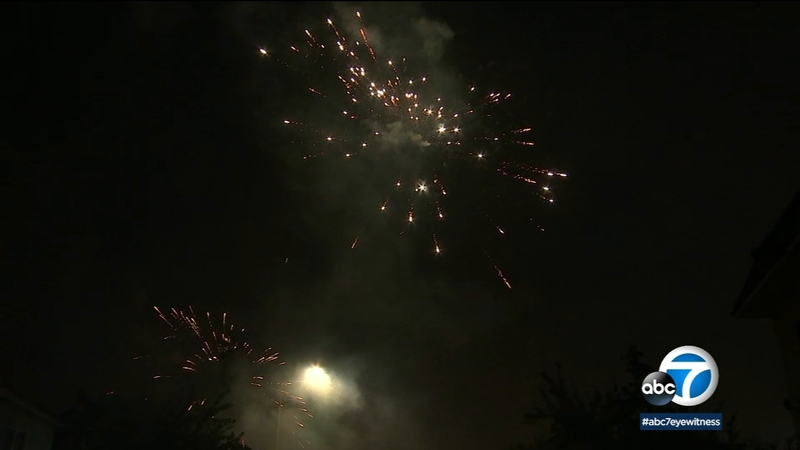 Fireworks illuminated the sky across Southern California as the region celebrated the Fourth of July, with loud bangs ringing through the night sky.

Although fireworks are illegal in the city of Los Angeles, and many other municipalities, that didn't stop residents from putting on a show for their neighborhoods.

AIR7 HD captured footage of the countless and widespread bursts of light and booms being set off.

Fireworks illuminated the sky across Southern California as the region celebrated the Fourth of July, with loud bangs ringing through the night sky.

Some fireworks were set off in the middle of the street in some neighborhoods, slowing down traffic as drivers made moves to avoid the displays.

"It's crazy. I just came from work (on) the 105 bridge...Everybody was pulled over and it was a whole scene. I was terrified driving...it was horrible," said Andrea Cifuentes of South L.A.

Though the vast array of fireworks made for stunning views, health officials issued a warning as the powerful blasts leave the air filled with a smoky haze.

The South Coast Air Quality Management District said poor air quality is likely in areas throughout the South Coast Air Basin, as fireworks -- both large, sanctioned shows and those of the personal "backyard" variety -- are known to emit high levels of particulate matter and metal air pollutants, all of which can contribute to negative health effects.

It's considered by many to be the best fireworks show on the West Coast, and this year's AmericaFest at the Rose Bowl did not disappoint.

The agency says the region could reach the Very Unhealthy category.

"Fine particulate matter levels on July 4 and 5 are typically among the worst (highest) days of the year in the South Coast Air Basin," according to the SCAQMD. "The smoke and combustion products from fireworks add to the fine particles already present in the basin that are primarily caused by motor vehicles, as well as fugitive dust and industrial emissions."

Breathing of fine particulate matter can lead to an array of cardiovascular and respiratory health effects such as heart attacks, asthma aggravation, decreased lung function, difficulty breathing, and may lead to premature death for those with heart or lung disease.