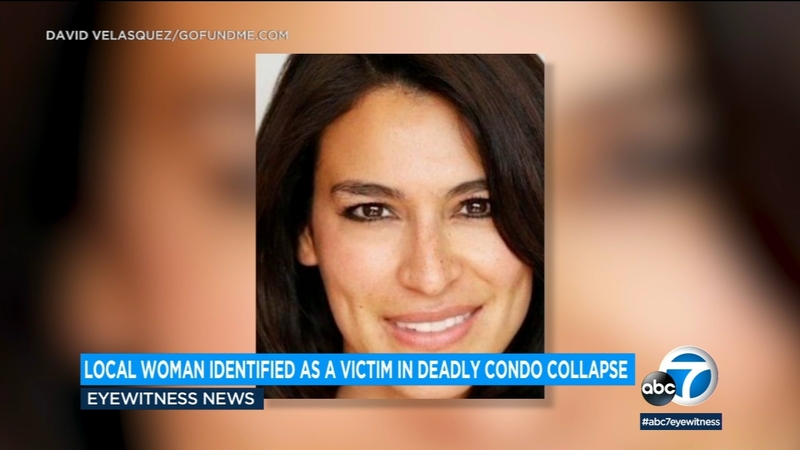 SURFSIDE, Fla. -- Another victim was identified in the collapse of a 12-story Florida condominium that killed at least 97 people, authorities said Saturday.

The Miami-Dade Police Department said in a news release that Theresa Velasquez, 36, was a confirmed fatality in the June 24 collapse of the Champlain Towers South condo. Her body was recovered July 8.

She becomes the 95th fatality identified in the collapse, police said.

Velasquez was a Los Angeles-based executive for the Live Nation event promotion company. She had flown into Miami to visit her parents at the Surfside condo, both of whom also died in the collapse.

The 911 calls during the first moments of the deadly collapse of the condo building in Surfside, Florida, reveal chaos and confusion.

"Theresa was an impassioned leader at Live Nation, who elevated every project she was part of, at the same time breaking down barriers for women, and the LGBTQIA+ community," the company said in a statement. "We will always remember and honor the impact she made, and will miss her dearly."

The bodies of Julio and Angela Velasquez were recovered and identified earlier.

The recovery effort at the condo site is slowly winding down, with perhaps one more body still buried in the rubble. Work is now shifting toward determining what caused the oceanfront condo to come down.

A judge is also considering what should be done with the building site. An outright property sale, government purchase for construction of a memorial or a combination of both are among the suggestions.

Officials said the criminal is seeing the victims' names in the news and then stealing their identities.