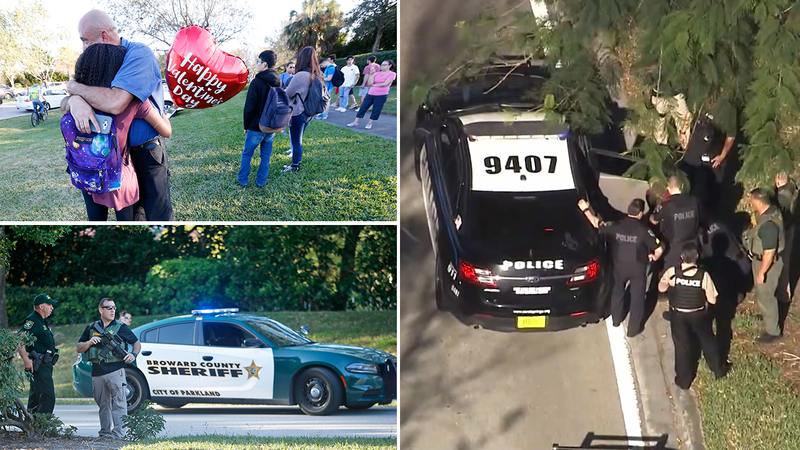 PARKLAND, Fla. (KABC) -- At least 17 people were killed when a former student opened fire at a Florida high school Wednesday, before authorities took him into custody.

A student who was inside Stoneman Douglas High School at the time of a shooting heard too many gunshots to count during the shooting spree.

Law enforcement sources said at least 17 people - both students and adults - died in the shooting. Numerous other people were injured.

The suspect was identified as Nikolas Cruz, 19, a former student who had been expelled from the school. He was armed with an AR-15 and numerous magazines, officials said.

He was also wearing a gas mask and carried smoke grenades, Florida Sen. Bill Nelson said, citing his conversation with the FBI. Nelson said he was told the shooter set off fire alarms so students would come out of the classrooms before he opened fire. It was not clear if he actually used the smoke grenades.

VIDEO: What we know about the shooter
EMBED More News Videos

A former Florida high school student opened fire and killed at least 17 people. Here is what we know about Nikolas Cruz.

Broward County Sheriff Scott Israel said the suspect was arrested without incident after he was located off the school grounds in a nearby community about two hours after the shooting.


A family member of Cruz told ABC News that he was adopted by Roger and Lynda Cruz - both of whom are now deceased - along with a younger brother. His adopted mother died last year from the flu.

Aerial footage showed police in olive fatigues, with weapons drawn, entering the high school, then dozens of children frantically running and walking quickly out. A police officer waved the students on, urging them to quickly evacuate the school.

Deputies in Florida are responding to reports of shots fired at a high school in the city of Parkland.

Some students exited the building in single-file rows with hands raised overhead to show they carried no weapons. Others held onto other students as they made their way out past helmeted police in camouflage with weapons drawn.

Of the 17 casualties, 12 died inside the school, two outside, one on the street and two at the hospital. The shooting began outside the school and then continued inside.