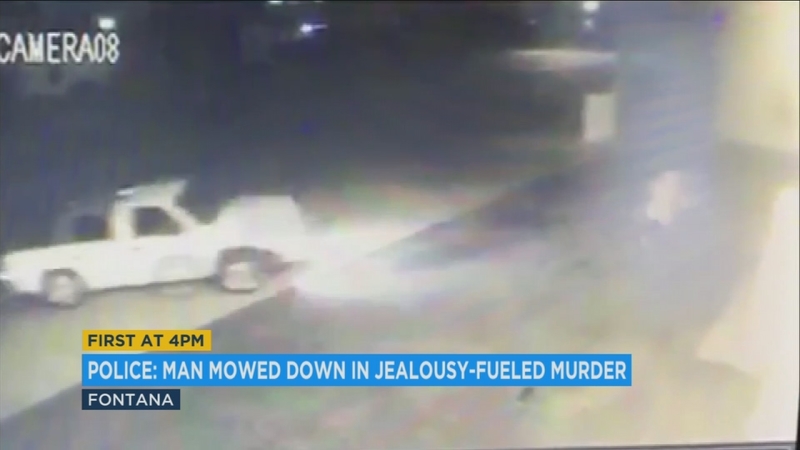 FONTANA, Calif. (KABC) -- Surveillance video from outside a Fontana 7-Eleven shows the moments leading up to what police say was a jealousy-fueled murder.

Eighteen-year-old Christian Dominguez is seen on surveillance video walking across the parking lot of the store. A white pick-up truck pulls in and drives out of view. Police said the driver tried to run over him and missed.

Another camera angle shows the truck chasing Dominguez seconds before hitting him and crashing into the building.

"Nobody ever expects this. To us, we're still waiting for him to walk through the door and tell us that he's home," said Jessica Millan, Dominguez' sister-in-law.

The victim's brother and father are devastated. They said Dominguez never got into any trouble.

Fontana police said John Nieto, the driver of the truck, thought his girlfriend, Elisabeth Mancilla, was cheating on him because Mancilla would occasionally drive Dominguez home from work.

On Wednesday night, police said, Nieto waited and watched his girlfriend drop off Dominguez, then he intentionally ran him over.

Nieto ran from the scene and was picked up by Mancilla. They were later arrested on Thursday.

Dominguez' father said at first, he was upset because he didn't understand the motives of the suspects, but now that they're behind bars, he thinks there will be justice.

The family said Dominguez was always happy and had the ability to win people over.

"Whether he spoke English or Spanish, he always got them to fall in love with him," Millan said. "With his personality, with how he really was."