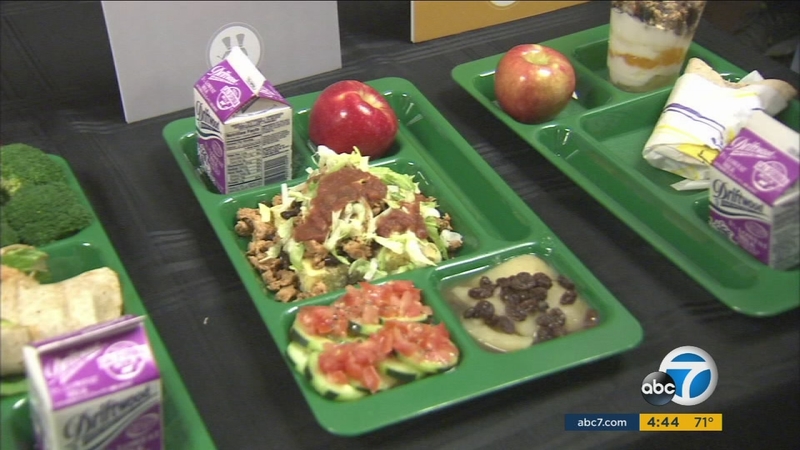 LOS ANGELES (KABC) -- At first glance this school lunch menu looks similar to past meals, but food service at the Los Angeles Unified School District has gotten a makeover.

"What we found in studies, that when you put something in that's healthier in front of the child, they tend to take it first," said Laura Benavidez, interim food service director for LAUSD.

Sounds simple, but making healthy look fun enough to eat has been one tough assignment for schools nationwide.

Studies indicating the majority of federally mandated produce and unflavored milks ended up in the trash instead of kids' tummies.

Researchers examined nutrition information for almost 4,800 school-age kids and found that about seven to 20 percent skipped lunch at least once a week.

Studies show lunch is instrumental in making sure kids meet their vitamin and mineral needs.

"A lot of bright colors, a lot of signage, changing the names and the lingos of just regular items," said Benavidez.

It's just the kind of wordplay that entices diners.

Plus, eye-catching packaging resembles ready-to-eat food you'd get at any market or cafe.

Along with the cafeteria, there's also "grab n' go" meals offered at key locations throughout school for those who need to nosh while studying.

And just like at the grocery where they have candy at the checkout counter, they feature beautiful fruit at the point of sale.

LAUSD was awarded $13,500 for each location to test pilot the program. Schools like Francisco Bravo Medical Magnet are setting the stage.