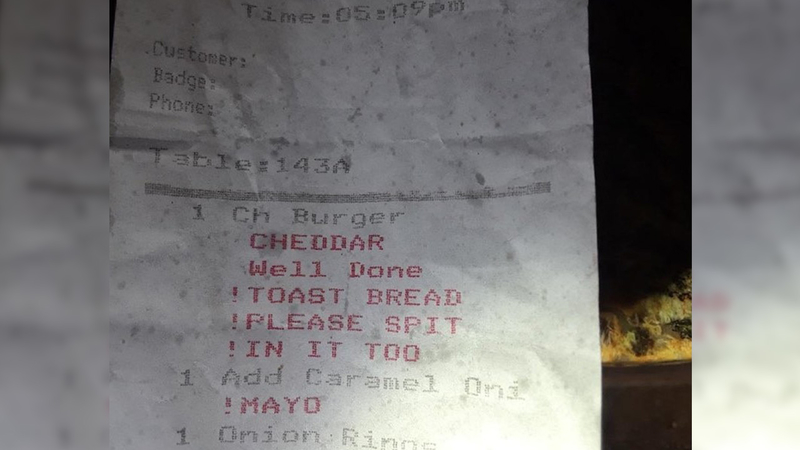 ASTORIA, Queens -- On a scorching hot summer night, what is better than a cold brew? Pair it with a juicy burger - cheddar cheese, well done - and toast the bread.

And please spit in it, too! Don't forget the mayo!

Curtis Mays says it all started because his order got mixed up.

EXCLUSIVE: On a scorching hot summer night, what’s better than a cold brew? Pair it with a juicy burger.
Cheddar cheese, well done, toast bread, please spit in it too! Don’t forget the mayo! Wait... spit?! At 11pm we’ll tell you which beer garden and what the manager told us. pic.twitter.com/45FWLNsTvS

"I ate my burger already, I felt like I was gonna throw up," he told WABC in New York.

He asked his waitress for his receipt, and that is when he noticed that "extra" ingredient.

"I asked her 'why would you do this?' And she couldn't explain it. She said she didn't do it, so I as like 'who prints out the receipt?' So she said 'I take it up there and print it myself.'" Mays said, "So you did it? Why are you lying about it? She just walked off."

The Sea Cliff man says he was being treated to a Father's Day dinner by his daughter and granddaughter at the Bohemian Hall and Beer Garden in Astoria when it happened. He says the evening started off pleasant.

Mays said the manager fired the waitress immediately, and he got a refund, of course.

"He was saying, 'how can we compensate you?' I was like, 'how can you compensate somebody for spitting on your food? I ate this already," adds Mays.

The manager told WABC that he had never had a problem with this employee before. Food service, he says, is a stressful job, but it was unacceptable.

The manager added that is very unlikely a cook actually spat in the burger, but he understands why the customer is upset.