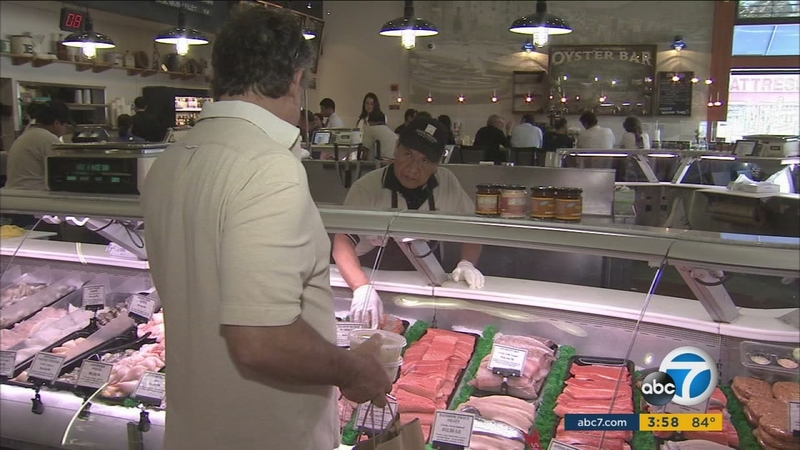 HUNTINGTON BEACH (KABC) -- Choose the dish not the fish. That's the mantra of Andrew Gruel, owner of the SlapFish chain.

"Sandwiches, tacos, fish salads - over the top, make it fun. Choose the dish not the fish," Gruel said.

He says that for a very good reason.

"When it comes to seafood we're all eating the same species. It's either salmon, shrimp, tuna," he said.

When the market is focused on just a few species, that puts more pressure on stocks of those fish, he said. That in turn creates a black market for the farmed version. It also leads to illegal under-reporting of fishing on the wild stocks, or those wild stocks will just collapse, he said.

Health experts ask us to eat seafood for health, but in reality 90 percent of people who eat fish only eat the same 10 species.

That's bad for the planet and your wallet as these species are over-fished, while others can easily be a good replacement for your favorites. And are less expensive.

"The price point is a quarter of what these demand species would be," Gruel said.

Gruel says you want to look for things like ling cod, white sea bass and rock fish. They're all back in favor and they're all full of flavor.

Ling cod is a fatty fish which can be eaten in lieu of salmon.

Once near-extinct, white sea bass caught off the California coast is a basic tasty white fish.

And most likely the ugliest fish in the world - monkfish - has its place on your plate.

"This is known as poor man's lobster. It eats like lobster. Great substitute out of the Atlantic," Gruel said.

Buying local helps U.S. fisherman too. The FDA can only check 2 percent of fish imports and it's reported the other 98 percent isn't always done in a healthful way to consumers or the ocean.

"The United States has a really great regulatory framework in which they manage all the fisheries. We are so far advanced than every place else," Gruel said.