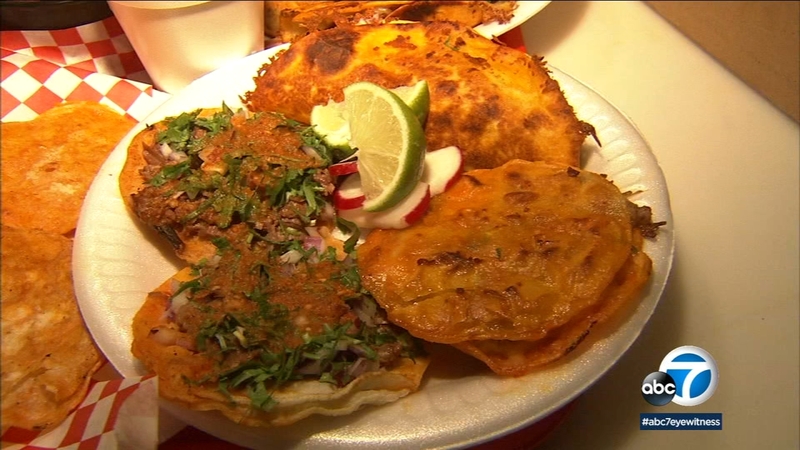 SOUTH LOS ANGELES (KABC) -- From a modest roadside taco stand to a nationally celebrated restaurant, a humble South Los Angeles taco truck will be the star of a Super Bowl commercial for millions to see.

During Sunday's Rams-Patriots game, Teddy's Red Taco Truck is getting a chance to showcase its delicious food.

"At first, I was kind of skeptical. I was like maybe they're trying to sell me something. Maybe this is a scam. But once we made the phone call and everything was real it was like wow this is happening, this is pretty amazing," owner Teddy Vazquez said.

On Sunday, ESPN Deportes is featuring Rams super fan Teddy Vazquez and his successful business in a Super Bowl commercial. They filmed it at his roadside pop-up restaurant.

It's located off the beaten path along unused train tracks, but fans declare it home of the best tacos in Los Angeles.

"You could go to Tijuana and try them and they're exactly like this," one man said.

With tender meat on a tortilla drenched in a tomato-based sauce, the piping hot tacos are as authentic as they come. Even celebrity Chrissy Teigen is a fan of the red and spicy tacos.

They’ve already served some big time customers too. @chrissyteigen had #TeddysRedTacos over for a house call! Next stop: #SuperBowl. pic.twitter.com/AU0V6MsdjM

Vazquez learned how to cook in Tijuana, and when he got back to L.A., he started driving for Uber and giving away his tacos.

"I had a pot in the trunk of my car and I would give people samples because I was excited and I wanted people to give me their feedback," Vazquez said.

The owner learned how to make tacos in Tijuana. Then started giving @Uber riders free taco samples when giving rides. Eventually he was able to get a truck. He now has three locations and will be featured on a Super Bowl commercial. @ABC7 pic.twitter.com/3RU2QUJFgH

Teddy now has three locations - and fans can't get enough. Chris Vera, who first came here a year ago, said he loves the food.

"I've been craving it for the whole year, and we finally found it," he said.