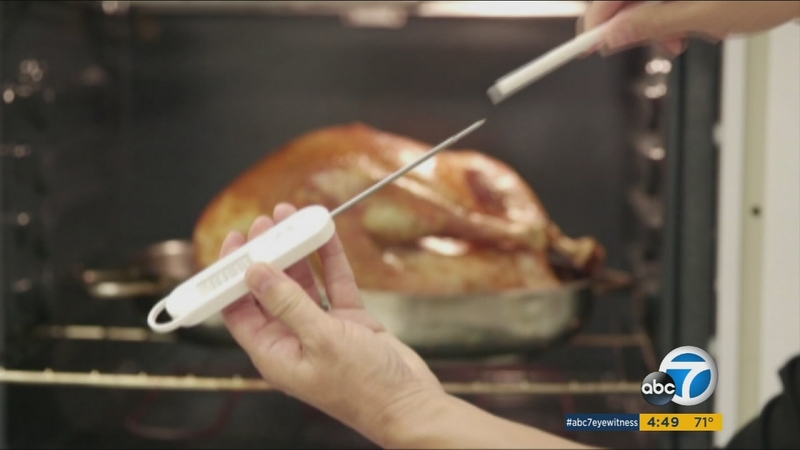 LOS ANGELES (KABC) -- A perfect roast turkey is a beautiful centerpiece at Thanksgiving. But be careful how you prepare it.

After thawing and removing the gizzards, you shouldn't wash your turkey because you're likely to spread bacteria across the counter tops, your hands, and the sink, where you'll be washing vegetables.

Any germs on the bird will be killed when you roast it.

As for stuffing? Break with tradition and don't put it inside the turkey. The chances of contamination aren't worth the extra moisture.

"You could also overcook your turkey, since you have to heat the stuffing to 165 to be safe," said Patricia Calvo of Consumer Reports.

A sweep of vegetable oil or cooking spray will ensure a browned skin. But once the turkey's in the oven, don't baste the bird.

"Basting flavors the skin, but it doesn't penetrate the meat. And every time you open the door you lose heat, which means your turkey has to stay in the oven longer and can dry out," Calvo explained.

To be safe, turkey has to cook through to 165 degrees. Don't rely on pop-up thermometers. Consumer Reports found that most of the ones they tested were not accurate, either popping too early or too late.

Take the temperature from the thickest part of the thigh or the breast of the turkey.

About 80 percent of the thanksgiving turkeys come frozen, so Consumer Reports said don't put them on the counter to thaw. Instead allow one day for every four to five pounds.

Consumer Reports is a not-for-profit organization that does not accept advertising and does not have any commercial relationship with any advertiser or sponsor on this site.