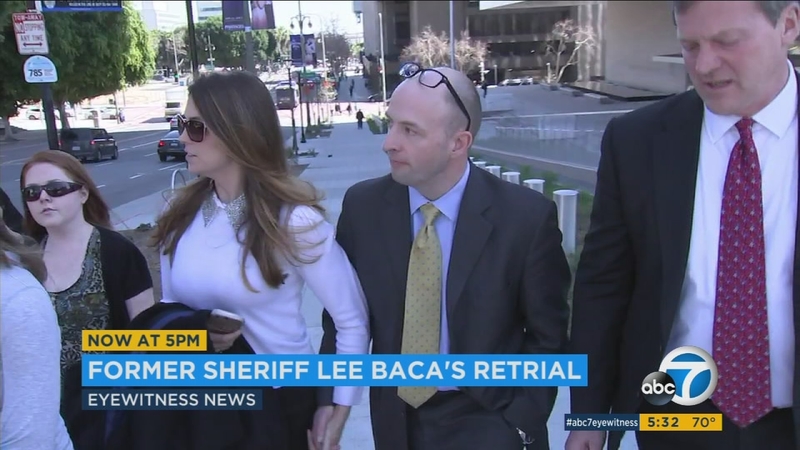 Motivated by justice he says, not vengeance - Sexton revealed new details of the scheme he dubbed "Operation Pandora's Box," and its alleged links to Baca, the one-time top law enforcement official in Southern California.

Baca and Sexton were longtime family friends before scandal engulfed the department - leading Baca to abruptly retire shortly after 18 LASD officials were charged in late 2013 for crimes ranging from inmate abuse to conspiracy and obstruction of justice.

"We were ordered to change the name of a federal informant by the name of Anthony Brown and secure him at an off-site location in San Dimas," Sexton told jurors on Wednesday.

Sexton says word quickly spread in the summer of 2011 - a cell phone found on inmate Brown inside Men's Central Jail - had been traced back to the civil rights squad of the FBI. That was unusual and significant, Sexton testified, because that particular FBI squad was known to investigate alleged corruption and civil rights abuses by law enforcement officials.

Sexton testified that the tone inside his elite "Operation Safe Jails" unit quickly turned "hostile or adversarial" toward the FBI.

LASD Lieutenant Greg Thompson, Sexton says, called on the young deputy's expertise to "circumvent the safeguards" in the LASD database to make inmate Brown vanish from the computer system.

The FBI had recruited inmate Brown to report on rampant allegations of deputy-on-inmate brutality and corruption. FBI agents set up an undercover sting inside the jail - and a corrupt deputy named Gilbert Michel -- accepted a bribe to smuggle a contraband cell phone to Brown behind bars.

The cellphone was discovered by jail deputies and quickly traced to the FBI - setting off a chain of events that eventually led to the criminal convictions of eight LASD officials - including Lt. Thompson and former LASD Undersheriff Paul Tanaka.

Sexton testified that OSJ deputies were ordered to guard inmate Brown 24-hours a day, seven days a week. "Unlimited overtime" for the operation was authorized from "all the way to the top," Sexton says he was told -- because this was the "highest priority" of LASD executives.

Was it to ensure Brown's safety? Or was it to hide Brown from his FBI handlers? Intent is a key question in the trial of the former sheriff. Baca defense attorney Nathan Hochman has sought to distance the former sheriff from acts he says "went beyond" Baca's agenda to investigate how a cell phone was smuggled into the jail.

Sexton described to jurors how he and other OSJ deputies repeatedly moved inmate Brown, changed his name and wiped his fingerprints from the system to ensure outside law enforcement agencies - like the FBI - could not find him.

If the intent was to safeguard Brown from corrupt deputies or inmates who learned Brown was an FBI "snitch," prosecutors asked -- why move him from the most secure module at Men's Central Jail where cameras were trained on him 24-hours a day -- to a minimum security jail at the LASD patrol station in San Dimas?

"Keep him happy," Sexton testified of his instructions on how to handle Brown. Cigarettes, fast food - Sexton said his "standing orders" were to ensure Brown maintained a "good attitude" for detectives looking into the inmate's links to the FBI.

Sexton acknowledged Brown was a known liar - that he'd been warned the inmate was "charismatic, manipulative and dangerous."

Brown - who'd recently been convicted in a string of armed robberies and sentenced to 423-years to life in prison - was regularly taken by deputies out a fire exit to smoke in the station's courtyard - an area easily accessible to the public.

"Use your judgment, but minimal restraints," Sexton testified of his orders to keep Brown happy.

Brown "made jokes" about how he might easily escape, but Sexton says deputies never turned their back on him.

Sexton initially cooperated with prosecutors as the federal probe evolved from deputy brutality and corruption - into a broader investigation of the LASD's attempts to block the FBI probe.

Sexton met with federal prosecutors and FBI agents 38 times in 2012 and 2013 -- but was indicted anyway. He served four-and-a-half months in federal prison for conspiracy and obstruction of justice before his release in January of this year.

"I received no promises and took no cooperation agreement," Sexton testified.

The former deputy's 18-month sentence was supposed to be served at a minimum-security federal prison camp, but once prosecutors subpoenaed him to testify against Baca, Sexton was moved to a series of maximum-security units and spent much of his time in isolation.

It was a far cry from the "Club Fed," Sexton testified of his repeated moves to ten different facilities and transports aboard "Con Air."

"Isolation is terrible," Sexton told the jury, nearly in tears.

Sexton's prison term was reduced in January by Judge Percy Anderson at the request of prosecutors who acknowledged Sexton's "hard time" in maximum security and isolation was tougher than intended.

Sexton is now under house arrest and will spend another year on probation.