NY Times data: Fresno County jail has had most COVID cases of any jail or prison in U.S. 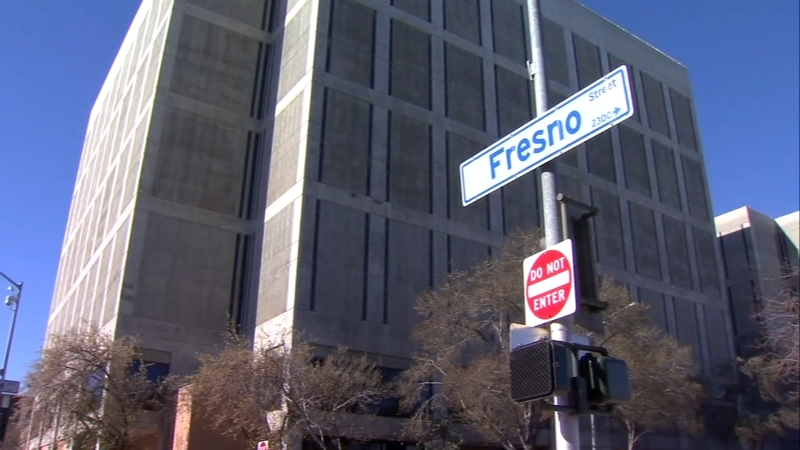 Fresno County jail has most COVID cases of any jail or prison in U.S.

FRESNO, Calif. -- The Fresno County jail has had more COVID infections than any other correctional facility in the entire country, according to data collected by the New York Times.

The Harris County jail in Houston, TX, ranks second but has more than three times as many inmates.

The next five on the list of correctional facilities with the largest number of inmates who have been infected with COVID are all California state prisons, including Avenal State Prison and the Substance Abuse Treatment Facility and State Prison in Corcoran.

But it's the Fresno County jail that looks like a Petri dish to its critics.

The facility houses about 3,000 people at full capacity, but in the last seven months, almost 4,000 inmates have tested positive for coronavirus.

The sheriff's office confirms it has had 3,814 inmates cases through Jan. 12 and has 28 active cases as of Feb. 1. That's almost 20% of all the inmates who've passed through the jail since the pandemic started.

Sheriff Margaret Mims says the high case count reflects their effort to root out the virus.

"We've been really aggressive with our testing at the Fresno County jail," she said.

The positivity rate for testing among inmates has been about 11%, Sheriff Mims said, which is slightly lower than the rate for Fresno County over the last 11 months.

The jail's first outbreak popped up in late June, a couple of months after criminal defense attorneys started pushing for prisons and jails to cut their inmate populations in half to allow for better social distancing.

They said the virus would spread among inmates, then trickle out to the community at large.

"It does trickle out and it's more of a river than a trickle because the increased infection rate translates to fewer beds in the critical care wards," said defense attorney Eric Schweitzer, who was head of the California Attorneys for Criminal Justice when the pandemic started.

Data from the Board of State and Community Corrections shows the Fresno County jail has released 16,882 inmates since April 5, and most of them for no reason related to COVID.

Then there's the staff.

"These people are all at highly increased risk when you don't thin out the population and give everybody a little space," said Schweitzer.

The defense attorney does credit the sheriff's office with taking steps to keep entrances clean and rejecting some infected inmates before they entered the jail.

Sheriff Mims says that's just the start of the protection they're trying to offer.

"Not only do we test, but we issue inmates masks," the sheriff said. "We have regular and thorough cleaning in place. We take the temperature of everyone entering the jails - not only our correctional officers but all of our vendors, all of our contract folks that come in -- we take temperatures and make sure they're not sick. Any protection we possibly can, we have in place."

But Schweitzer says crowded conditions are the number one problem. $0 bail was supposed to help, and it did for a while.

Sheriff Mims cut the number to 2,600 by April, and the population went down to about 2,200 during $0 bail, before bouncing back up to 2600 when the county instituted its own $0 bail policy.

For now, the county's $0 bail policy is set to end 90 days after the state emergency order expires.

The sheriff says they've learned a lot over the months about how to contain the virus, and they had a bit of a head start because of a mumps outbreak a couple of months before COVID arrived in Fresno County.

Their intake operation is one example, and they've suspended visitations for family members and friends. They'll allow it again "as soon as we can," said Sheriff Mims.

"This week, law enforcement -- including our correctional officers -- will be scheduled for vaccines," Sheriff Mims said. "Inmate vaccinations are coming. They're not yet ready for the inmates, however, they are on schedule to be vaccinated should they volunteer to be vaccinated."

A day after our report aired, the sheriff's office questioned the accuracy of the New York Times data, which we told the sheriff we were using for our story.

"There are a combined total of 5,077 jails and prisons (state and federal) in the nation," spokesman Tony Botti told us. "The NY Times only polled 1,298 facilities, which is only 25%. I don't see them as a reliable source for information. They don't account for unreported facilities and the test rates, which I'm sure we are one of the highest. Just like we as a nation test more than any other country, the positives are bound to be higher. Our jail is doing a solid job of adjusting to the virus and this paints us in a bad light, especially when we don't have any deaths."
Report a correction or typo
Related topics:
health & fitnessfresno countycoronavirus californiajailcoronaviruscovid 19 outbreakcovid 19
Copyright © 2022 KFSN-TV. All Rights Reserved.
CORONAVIRUS CALIFORNIA
Job hunting? Here's a list of companies hiring in SoCal
LA County Sheriff Alex Villanueva tests positive for COVID
COVID vaccines for kids under 5 ready as LA schools see more cases
SoCal COVID cases rise while rest of nation plateaus
TOP STORIES
Boy killed, girl injured during ATV hit-and-run in Apple Valley
Video shows man attacking Malibu home, vehicle with pickaxe
Carlos Santana collapses during Michigan concert
More than $1M raised for boy whose parents died in IL shooting
Charges filed in overdose deaths of LA model, friend
Family seeking more answers about LAPD officer's death
Volvo's new EV helping lead the company to an all-electric future
Show More
Man convicted in 2019 Long Beach crash that killed couple, 3-year-old
July 4th fireworks trigger air-quality alert in SoCal
'Crime tourist' from Chile convicted in Ventura County burglary
New Range Rover retains luxury features, foreshadows electric model
Highland Park parade shooter charged with 7 counts of murder
More TOP STORIES News