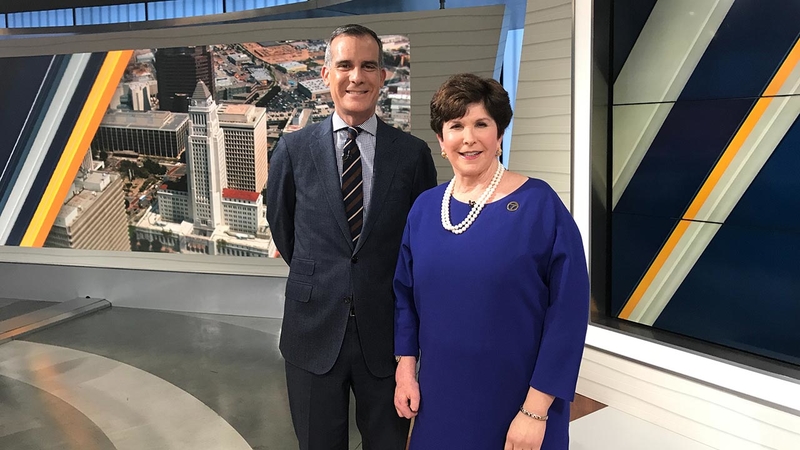 In addition to the Crenshaw to LAX line currently underway, the city will explore a nonstop express line from Union Station to LAX. With advances in monorail technology, Garcetti said it is a viable option to run down the 101 or the 405 freeways.

Though President Donald Trump cut funding for California's earthquake early warning system, the mayor said by next year, Los Angeles will have one, alerting residents through mobile phones, giving us a few moments to get under a desk, out of an elevator or stop a train. Calling the state system a life or death situation, Garcetti urged bipartisan help to get the state's federal funding restored.

The mayor said the Climate Mayors group he co-founded two years ago has expanded from 30 to 300 since Trump withdrew the U.S. from the Paris Climate Accord. Garcetti vowed to continue L.A.'s green agenda. He has joined with Long Beach Mayor Robert Garcia on a goal of zero emissions from the cities' twin ports.

The mayor answered viewer questions focused on quality of life issues. Much of the city's 20 percent increase in homelessness is due to the lack of affordable housing. He discussed the timing of funding that will roll out from voter approved measures. He expressed confidence the City Council will approve linkage fees - requiring developers to pay into an affordable housing fund.