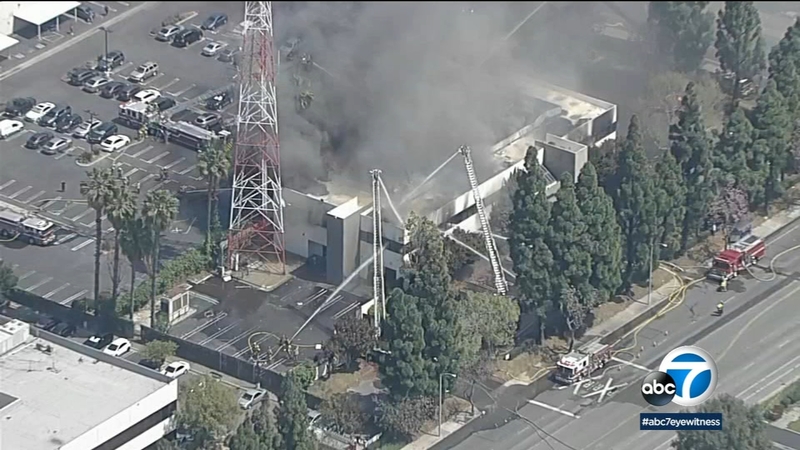 GARDEN GROVE, Calif. (KABC) -- Firefighters on Monday were battling a massive fire that ripped through a two-story commercial building in the Garden Grove area.

The fire was reported around 11:20 a.m. on the 7400 block of Chapman Avenue, according to the Orange County Fire Authority. The blaze created a thick plume of black smoke over the area.

Crews were fighting the flames in a defensive mode as they doused the building with water. No injuries were immediately reported.

The incident came in at 11:20 a.m. Firefighters initially went inside to search for people and confine the three alarm blaze. Due to the extreme fire conditions, crews were pulled out and they went into a defensive mode. No injuries reported & no cause determined at this time. pic.twitter.com/gcbB3H9h9R

According to an update issued by OCFA on Twitter, it took firefighters about 18 minutes to get the fire fully under control.

It took firefighters two hours and 18 minutes to get the fire under control. Fire investigators are on scene, and a cause has not been determined yet.

Southbound Western from Orangewood to Chapman and Chapman from Western to Monarch are closed to traffic.

It's unclear if anyone was inside the building when the fire started.

The cause remains under investigation.