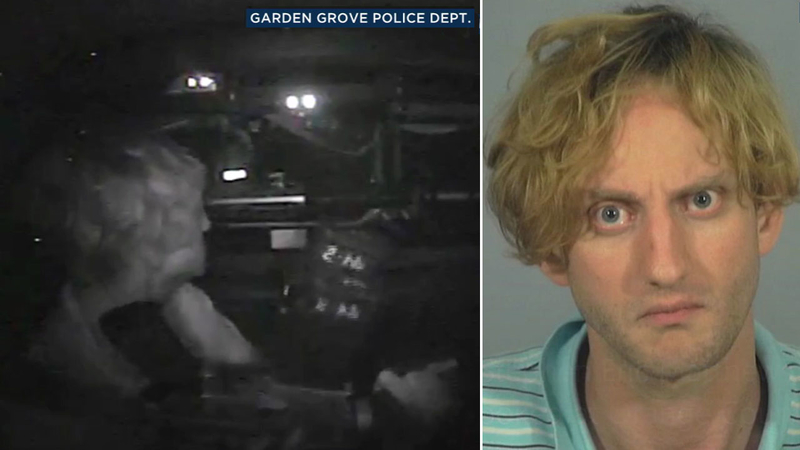 GARDEN GROVE, Calif. (KABC) -- Garden Grove police released dashcam video Thursday from inside one of their cruisers when a man had barricaded himself inside it earlier this week.

The incident started around 10 p.m. Tuesday, when authorities arrived to a request for help at Morningside Recovery, a drug and alcohol treatment facility. When officers arrived, one of the health workers conducted a psychiatric evaluation on the person they needed help with.

The worker determined the man, later identified as Stephen Matthews, needed to go to a hospital for further evaluation and requested an ambulance. The 33-year-old New York resident was then asked to sit inside the back of the police cruiser until the ambulance arrived.

Garden Grove police released dashcam video Thursday from inside one of their cruisers when a man had barricaded himself inside it earlier this week.

During that time, the suspect accessed the front portion of the vehicle and took hold of an AR-15 rifle. He refused to listen to commands to put the rifle down and at one point fired a single round while inside the vehicle. It went through the front part of the windshield, authorities said. No one was injured.

In the newly released dashcam video, it shows Matthews frantically moving through the front seat of the vehicle and grabbing the weapon. The nearly eight-minute video also shows when he fired the single round through the windshield.

Authorities said the locking mechanism on the partition window that separated Matthews from the front of the vehicle failed.

After an hourslong standoff that involved two bearcats, a SWAT response and a crisis negotiator, Matthews surrendered and was taken into custody.

In addition to releasing the video Thursday, Matthews was charged with multiple felonies. Those charges include assault with a firearm on a peace officer, shooting from a motor vehicle, discharging a firearm with gross negligence, unlawful possession of a loaded firearm in public and vandalizing property over $400.