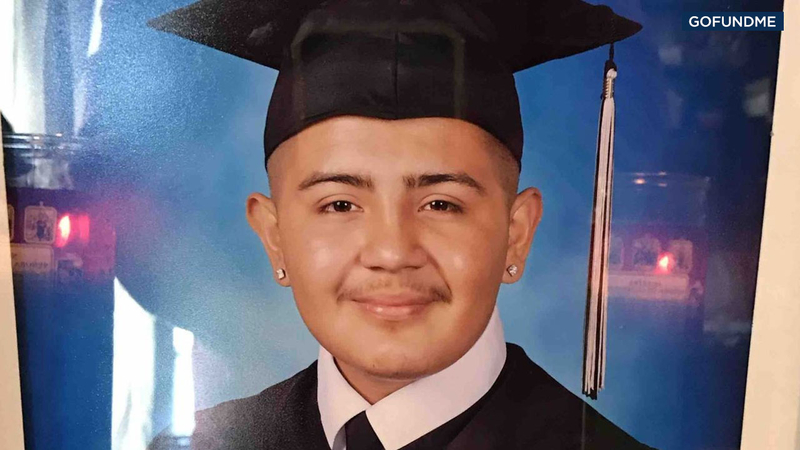 LAWNDALE, Calif. (KABC) -- The teen killed in a drive-by shooting in Gardena last week has been identified as a 17-year-old honor student who attended high school in Lawndale.

David Poblano was a beloved student at Environmental Charter High School. Family members say David had a very bright future and was looking forward to graduating. He played soccer at the school and was popular among his classmates.

"He didn't deserve to die this way. I'm literally shaken up by all of this, and we don't know how we're going to deal with school today and everything coming up, like graduation," said fellow student Liliana Banuelos.

The teen was gunned down in an apparent drive-by shooting at approximately 7 p.m. Friday on 146th Street in Gardena. Friends say David, his girlfriend and his mother were dropping off a birthday party invitation to his little sister's celebration when the suspects pulled up in a light colored sedan.
EMBED More News Videos

A juvenile boy was killed in a drive-by shooting in Gardena Friday night, authorities said.

Someone inside the vehicle opened fire, striking David in the upper chest. He was rushed to an area hospital, where he was later pronounced dead.

A memorial of flowers and candles continues to grow near the scene in David's memory.

"He was really outgoing, and he wanted a future, he wanted to go to college," said Kristopher Escobedo, another fellow student.

Adrian Elias, who played soccer with David, described him as a "good guy."

"He would do anything to make us laugh, and he would give good advice," Elias said.

David's friends said he was a member of the Gardena Police Department's Explorer program and dreamed of becoming a police officer. They said David was not affiliated with any gangs, and he was an innocent victim.

Other players on his soccer team said David was known for his positive energy and also for helping others.

"He was a big part of the team. He always cared for how everyone played, and if you played bad, he supported you no matter what," said teammate Jose Barrios.

Investigators later released surveillance video of a sedan leaving the scene. Anyone with information is urged to contact the Gardena Police Department.