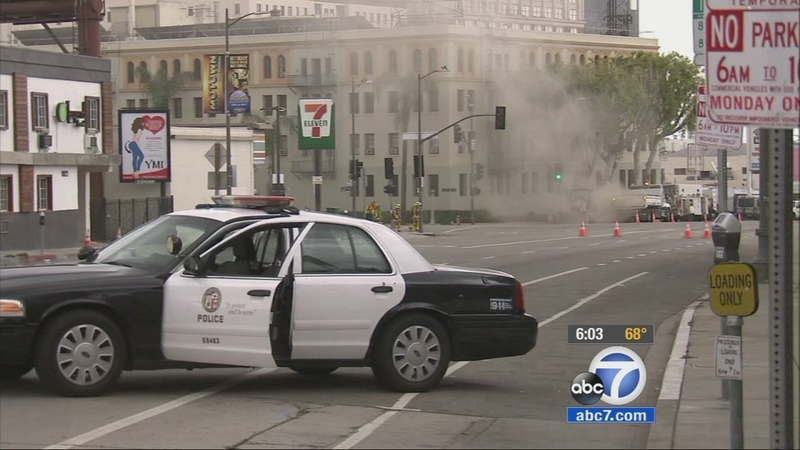 HOLLYWOOD, LOS ANGELES (KABC) -- A Los Angeles Department of Water and Power crew punctured a gas line in the 1700 block of N. Cahuenga Boulevard in Hollywood Saturday, prompting precautionary evacuations of more than 100 people from nearby buildings.

Crews with the LADWP were in the process of installing a water sample on a water main when their backhoe punctured the marked six-inch gas line at about 11:30 a.m.

"We were prospecting over that mark and what we did is excavate three-and-a-half feet away from it to basically take the soil from where their mark is and throw it into a different location, and in the process we came in contact with their gas main," Kirk Broyard of the LADWP said.

More than 100 people and 10 pets were evacuated from six buildings, Los Angeles Fire Department officials said. About 35 people were told to shelter-in-place.

The odor from the natural gas was so pungent downwind that people covered their noses and mouths.

"One of the things I do worry about is that it's gonna be an explosion, you never know. These gas lines are running all up and down this street, through the businesses, the homes, it's a big problem," Madera Kitchen and Bar employee Marco Peralta said.

Cahuenga Boulevard was closed to traffic at Yucca Street, one block north of Hollywood Boulevard. The boulevard is expected to remain closed overnight.

A shelter was opened by the American Red Cross and the Department of Parks and Recreation at Poinsettia Recreation Center, located at 7341 Willoughby Avenue.

Joe McQueen, who performs on Hollywood Boulevard as "The Hulk," was one of 86 evacuees who were spending the night on cots at the shelter.

"Better safe than sorry, because you never wanna be exposed to anything that's gonna harm you in any way," McQueen said.

LAFD officials said the ruptured gas line wasn't expected to be fixed until 4 a.m. Sunday. Southern California Gas Company crews have to dig under pavement to access the line's valves.

"The situation is that where the gas pipe line damage occurred is pretty deep, so now they have to do shoring to hold the walls so that they don't cave in when they go in their to do the work," said Denise Campos of the SoCal Gas Co.

Buses transported evacuated residents to the temporary shelter. Evacuees will be allowed to return home at about 5 a.m. Sunday, LAFD officials said.

Crews will remain on scene overnight as a precaution.

"We are standing by with firefighting lines in place. This is a hazardous situation, where an inadvertent spark could start a fire so we're in place for that reason," said LAFD Capt. Daniel Curry