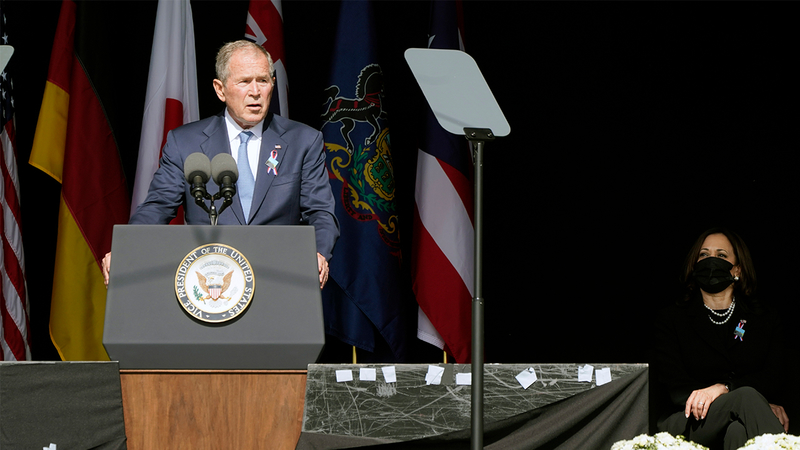 SHANKSVILLE, Pennsylvania -- Former President George W. Bush told people at the Flight 93 National Memorial in Pennsylvania that Americans learned much about themselves on Sept. 11.

"We learned that bravery is more common than we imagined, emerging with sudden splendor in the face of death," Bush said Saturday at a ceremony on the 20th anniversary of the attacks.

Bush, who was president during the attacks, commended the courage of the Flight 93 passengers and crew who are believed to have foiled an attack on the U.S. Capitol by leading the plane to crash in rural Pennsylvania.

Former President George W. Bush delivered a compelling speech in Shanksville to mark the 20th anniversary of the 9/11 attacks.

"The 33 passengers and seven crew of Flight 93 could have been any group of citizens selected by fate. In a sense, they stood in for us all," Bush said. "The terrorists soon discovered that a random group of Americans is an exceptional group of people."

He encouraged Americans to put aside their political differences in the spirit of what he saw after 9/11.

"So much of our politics has become a naked appeal to anger, fear and resentment," Bush said. "On America's day of trial and grief, I saw millions of people instinctively grab their neighbor's hand and rally to the cause of one another."

Vice President Kamala Harris began her remarks at the Flight 93 memorial with words for those who lost loved ones on Sept. 11.