Remembering when George H.W. Bush skydived on his 90th birthday 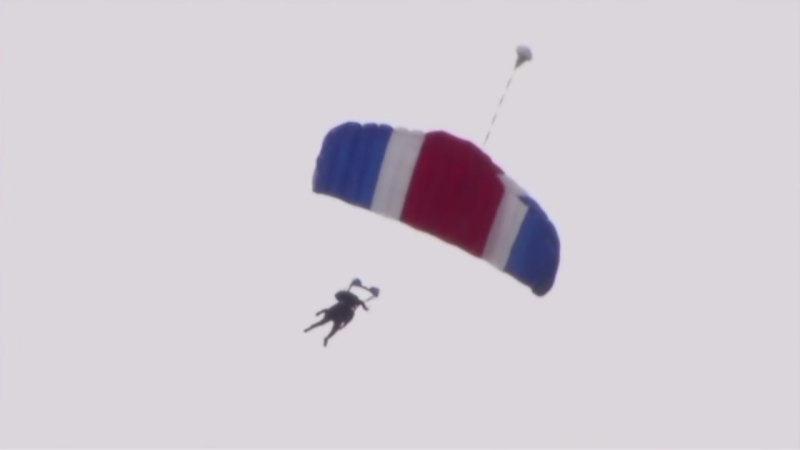 Raw video: When George Bush skydived on his 90th birthday

Former President George H.W. Bush celebrated his 90th birthday back in 2014 by making a tandem parachute jump near his summer home in coastal Maine, fulfilling a goal he made in 2009 after a similar jump even though he could no longer use his legs.

The nation's 41st president jumped from a helicopter at about 6,000 feet while harnessed to retired Sgt. 1st Class Mike Elliott, a former member of the Golden Knights, the Army's parachute team. Elliott guided Bush to a safe landing on his 85th birthday.

"That's what he wanted for his 90th birthday and that's what he got," Elliott said. "It's a very good feeling to be involved and be able to turn back time."

The helicopter picked up Bush outside his Kennebunkport home. His family transported him from his wheelchair to the chopper, singing "Happy Birthday" before it took off.

Bush floated to the ground under a red, white and blue parachute and landed on the lawn of St. Ann's Episcopal Church, where several hundred friends and family had gathered. Elliott said Bush's foot got tangled up underneath him during the landing, causing him to tumble forward onto the ground. A spokesman later said the former president was feeling "fine."

"He had a big smile for the crowd. You could tell he was exhilarated," said Diana Untermeyer, a family friend from Houston. "He's an amazing man. This is just another sign of that. I think that like most of America, our family loves him to pieces. It was just a real thrill to do this again."

Bush was greeted with a kiss from his wife, Barbara, and a hug from his son, former President George W. Bush. The family left without talking to reporters.

Outside the grounds, several hundred people gathered on the rocky shore to get a glimpse of the jump.

"He has a lot of courage. We need more like him," said David Morris, 79, of Melrose, Massachusetts.

The jump was kept secret until Thursday morning partly to give Bush the option of bagging it because of less-than-ideal weather, including a low ceiling of clouds.

"It's vintage George Bush," spokesman Jim McGrath said. "It's that passion for life. It's wanting to set a goal, wanting to achieve it. I'm sure part of it is sending a message to others that even in your retirement years you can still find challenges."

Bush had to overcome the objections of his doctor, Barbara and the rest of the family before making the latest jump, Elliott said. Eventually, he won them over.

"He's smiling like a kid in kindergarten," Elliott said following the jump.

Bush's jump was indicative of a trend among people of advanced age, said Lenard Kaye, director of the Maine Center on Aging at the University of Maine. More and more seniors are participating in extreme physical activities deep into their golden years, a trend that will pick up steam as more baby boomers retire, he said.

Such "extreme acts of adventure" are becoming a part of many seniors' lives but they need to be mindful that their bones are more fragile than when they were younger, he said.

During his years in the White House, Bush was known for jogging, tennis and fast-paced golf. The former president, who signed the landmark Americans with Disabilities Act in 1990, now uses a wheelchair or scooter because of a form of parkinsonism that has robbed him of use of his legs.

The first time Bush jumped from an airplane was when his plane was shot down in World War II over the Pacific. He marked his 75th, 80th and 85th birthdays by skydiving. Thursday was his eighth jump.

Other birthday festivities included a private dinner with more than 200 relatives and friends, including some from his White House days: press secretary Marlin Fitzwater, White House counsel Boyden Gray and political director Ron Kaufman, McGrath said. His children, including George W. Bush and former Florida Gov. Jeb Bush, will be there, McGrath said.

Kennebunkport is a special place for the president. As a boy, he visited the family home at Walker's Point every summer, except during World War II. The retreat was later dubbed his "summer White House."

Here's five things you may not have known about George H.W. Bush.

The 44th president visited with former President George H.W. Bush at his home just three days before he died.