KABC
By Josh Haskell
LOS ANGELES (KABC) -- There is growing backlash over a Valentine's Day message reportedly circulating the Los Angeles Police Department that mocked the death of George Floyd.

LAPD Police Chief Michel Moore, L.A. County District Attorney George Gascón, the LAPD Police Union and community groups are outraged over the alleged photo of Floyd with the words "You take my breath away" in a Valentine-like format that was circulated among officers.

"There's no room for mocking anyone's death especially someone who died at the hands of police in Minnesota," said Najee Ali, a community activist and director of Project Islamic Hope.

Over the weekend, an LAPD employee reported seeing the image, told his superiors, and was interviewed by the department Monday. But, the LAPD tells Eyewitness News that they have not seen the image, even after a workplace survey was conducted. In a statement, the department said they have "zero tolerance" for this type of behavior.

The LAPD has launched an internal investigation after an officer reported that a photo of George Floyd with the words "You take my breath away" in a Valentine-like format was circulated among officers.

"We do demand very clearly that every single officer who was involved in this incident be fired immediately. No pension. No benefits. We want them out," said Maya, a community activist in San Pedro.

"It's scary knowing that we have racists who might come into our community and be in charge of policing Black people. It's scary knowing that people are of that mindset that they can mock someone's murder. This man had a foot on his neck for over eight minutes and died in the hands of police, and yet someone in the LAPD thinks it's funny," said Ali.
George Floyd's family isn't laughing either.

"The Floyd family is understandably outraged," family attorney Ben Crump said. "This is beyond insult on top of injury - it's injury on top of death. The type of callousness and cruelty within a person's soul needed to do something like this evades comprehension - and is indicative of a much larger problem within the culture of the LAPD."

The allegations the post has been shared or was created by an LAPD employee are still being investigated, and it's not clear if the image was viewed at the workplace. The Los Angeles Times reports Chief Moore says investigators will try to determine how the image may have come into the workplace and who may have been involved.

The police union also repudiated the possible existence of what they call an "abhorrent image," saying anyone who would engage in creating or liking this photo should not be a member of law enforcement. 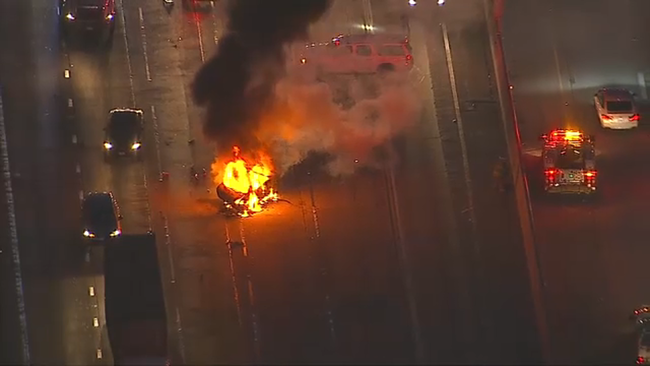