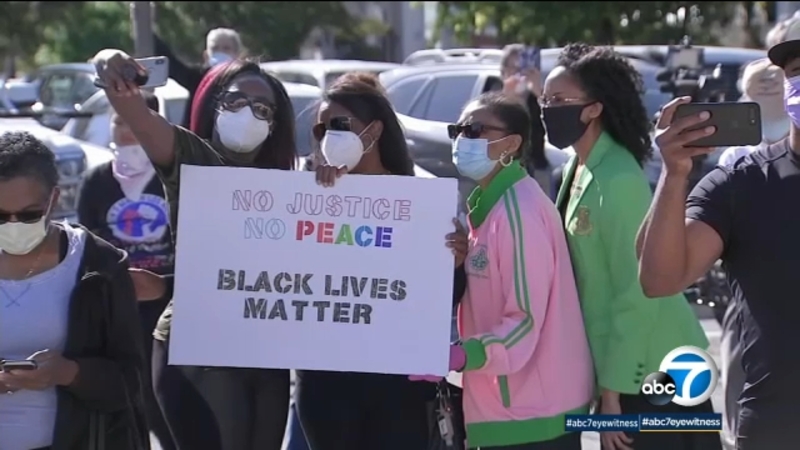 The memorial organized by Black Lives Matter Los Angeles will have four processions, each led by a hearse, that will converge in downtown Los Angeles at 1st Street and Broadway for a rally and the service set to begin at noon.

The processions, each led by a hearse, will start in South L.A., Long Beach, Santa Ana and Reseda.

Thousands of people flooded the streets of Hollywood on Sunday for a massive protest over the death of George Floyd.

In addition to honoring Floyd, organizers will also demand justice for those killed by police.

The four locations of where the processions will start are as followed:
- Leimert Park: W. 43rd Pl. & Degnan Blvd., Los Angeles, 9 a.m. meetup

The tribute in L.A. comes after Floyd's life was remembered and honored in a memorial service Saturday in Raeford, North Carolina, near where he was born. That service was attended by friends, family and others who mourned the life of the 46-year-old who was described as a gentle giant.

A wave of protests have swept across Southern California, the nation and the world since video emerged of a white Minneapolis police officer pinning his knee on Floyd's neck.

Like many recent demonstrations, organizers hope today's events will spread a message of unity and peace.

"We're in touch with the Floyd family and so they understand that we're doing this today, and this is just an opportunity for us to really mourn the death of our fallen brother," said Rev. James Thomas. "As we fight, a lot of us have been frustrated and angry because we haven't had the time to mourn. What we're hoping today is that we'll turn another page and that we'll all be able to come together."