As George Floyd protests continue across the nation, the Southland saw many powerful moments reflective of a community coming together during a turbulent time.
KABC 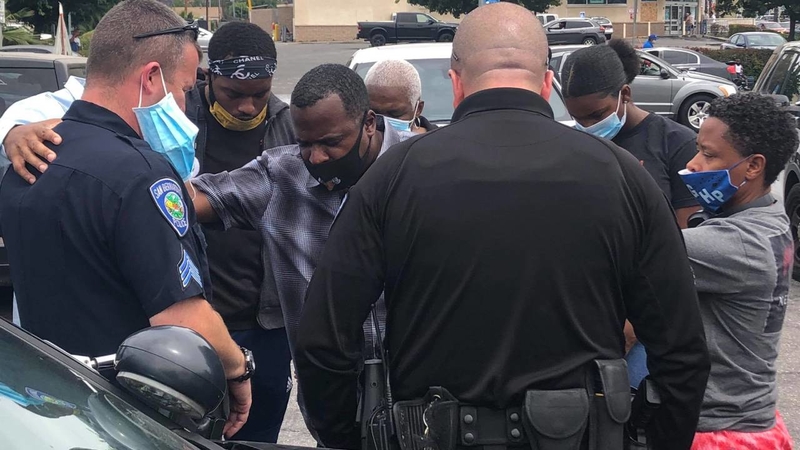 Protesters have been taking to the streets around the world seeking to stop police brutality in the wake of George Floyd's killing.

Amid the unrest, we saw many powerful moments reflective of a community coming together during a turbulent time. Here are just a few extraordinary moments captured on the streets of Southern California.

During a faith based rally in downtown Los Angeles Tuesday, demonstrators asked police officers to kneel down with them, and several did just that right in the middle of the street.

Los Angeles Mayor Eric Garcetti kneeled alongside a large group of protesters at a demonstration in downtown L.A. on Tuesday.

In Watts, elected leaders, clergy and other community members knelt together Sunday, offering a shared prayer for peace. They said Watts has come a long way since the uprisings of 1965 and 1992, and while they support peaceful protests, they won't stand for violence. They also called for solidarity with law enforcement.
EMBED More News Videos

Leaders of Watts, the site of historic riots in 1965, are calling for peace in the wake of protests over the death of George Floyd.

In the Fairfax District last weekend, community members rallied around a local hair salon, which was severely damaged amid a night of looting and fires in the area. Molly Scargall, who owns Goo Salon, said area residents were out cleaning damage done to her shop - even before she arrived at her store early Sunday morning.
EMBED More News Videos

STANDING STRONG: "I just definitely want to thank the Fairfax community for having my back 100%. I'm here for you, too." A local salon owner said residents were out cleaning the extensive damage done to her shop - even before she arrived at her store early Sunday morning.

A jewelry business owner in Santa Monica said a young woman with a bicycle stayed in front of his store for hours, helping to ward off a band of looters.
EMBED More News Videos

STANDING FOR GOOD: A woman stood with her bike in front of Bubar's Jewelers in Santa Monica for a couple hours to help protect the store from potential looters.

During a protest in Santa Monica over the weekend, one demonstrator shared an inspiring embrace with SWAT Officer Scott McGee. The two also shared a handshake while the surrounding crowd cheered on the moment and began chanting the officer's name. Someone else was also heard saying "all we want is a dialogue."
EMBED More News Videos

Through the many peaceful protests taking places across the country, there have been moments of hope, including one involving a Santa Monica SWAT officer.

LAPD Cmdr. Cory Palka on Monday was at the center of an inspirational moment in Hollywood. On Sunset Boulevard, Palka got on a megaphone and spoke with protesters who surrounded him.

"If I take a knee with you guys will you give me your verbal acknowledgement that this is a peaceful rally," Palka asked the protesters.

They cheered and shouted and chanted "Take a knee, take a knee." Palka paused, and put one knee on the ground and bowed his head briefly as the crowd cheered. Some reached out to shake his hand.

"We stand together," Palka said as the entire crowd took a knee with him.

Palka was in the public spotlight only two weeks earlier after he recovered from COVID-19 and sought to help other patients by donating plasma to the Red Cross.

As thousands packed the streets of Hollywood on Tuesday, demonstrators were seen working hand in hand with police with a united goal: to keep the peace.

"We don't want to do anything that's not peaceful. We've been peaceful all day, and if you think about it, literally no one's been getting hurt," said one protester, who was seen shaking hands with an LAPD officer during the massive rally.

At a protest yesterday in Hollywood, @abc7robhayes spoke to one of the leaders of the gathering, who was working with police to keep the demonstration peaceful. More details: https://t.co/6GIs4AdzfX pic.twitter.com/JeuVYDtb4u

Riverside County Sheriff Chad Bianco and a group of deputies took a knee alongside protesters during a demonstration on Monday. Bianco called on the crowd to work with him to make a difference.

Though Riverside experienced some tense moments amid ongoing protests and looting, there were also some displays of solidarity between law enforcement and protesters on Monday.

In another moving moment, San Bernardino residents gathered Monday morning to pray with two of their police officers after a night of destruction. While there may have been dozens of people looting Sunday night, there were also many community members showing up to help business owners clean up.

Also in San Bernardino, community members rallied around Joyce Kang, a single mother whose small business was looted. Residents led a prayer outside the store to show their support for Kang.
EMBED More News Videos

Widespread protesting and looting was seen over the weekend in San Bernardino, but in the aftermath, community members on Monday rallied together to show their support for some of the businesses owners.

Protesters in Brea shared a powerful moment of silence on Tuesday. Hundreds of demonstrators kneeled in calm solidarity in front of police officers. Many were holding signs, and holding up their fists.
EMBED More News Videos

In addition to the moment of silence, hundreds of protesters peacefully marched across the city. One demonstrator shared the emotional impact the experience had on her.

"It's a dream come true, to be honest as an African-American. I've never ever experienced this in my life, to be surrounded by all types of people, all diverse types of people who are actually coming and standing for me! I can't tell you how moving that is, makes me wanna cry. I'm literally in shock," she said.
EMBED More News Videos