After finding out her studio was looted, Katrien Van der Schueren decided to use her storefront to spread positivity.
KABC 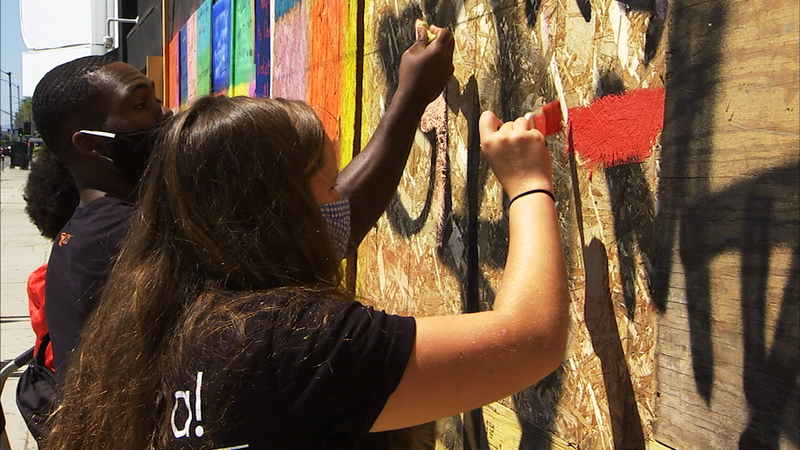 LOS ANGELES (KABC) -- Voila! Creative Studio is giving a voice to protesters amid the George Floyd demonstrations. The design and fabrication studio, which normally also operates as an event space and framing shop, turned an unfortunate situation into an opportunity to spread positivity.

After a night of protests, studio owner Katrien Van der Schueren received a call from her neighbor, notifying her that her store had been looted.

"It felt tremendously sad because there is so much hurt and anger," Van der Schueren said. "So, we started boarding everything up."

However, Van der Schueren's daughter, Emma De Beuckelaer, saw this as an opportunity to allow for a different form of protesting--through art. Soon after, she released a video encouraging people to paint the boards with positive messages.

"Right now we're putting the voices of our youth, messages from my generation who want to spread awareness, spread hope and protest for change," De Beuckelaer said.

"I wanted to give the youth a voice. It's important to hear their messages and it's important for them to express themselves," Van der Schueren added.

Messages painted onto the storefront range from "we must not be silent" to "all you need is love" and many more. The most powerful message, according to Van der Schueren, was written by a nine-year-old and said, "I want to live."

"That's very telling, that a nine-year-old has that to say," Van der Schueren said.

The art on the studio's storefront has been met with positivity by the local community. The studio owner is proud that she could provide a canvas to unite people and calls the paintings a form of "healing."