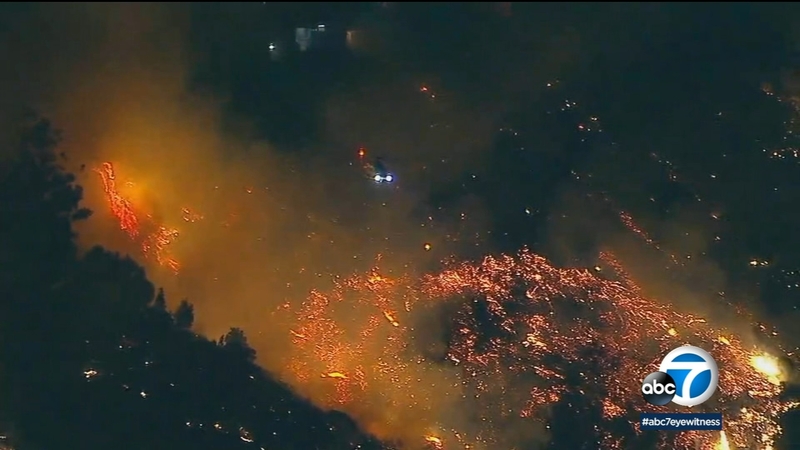 BRENTWOOD, LOS ANGELES (KABC) -- Most evacuation orders and warnings were lifted after 5 p.m. for residents affected by the Getty Fire.

Several ramp closures along the 405 Freeway continued Wednesday as another Santa Ana wind event, possibly the strongest of the season thus far, was expected to bring gusts up to 80 mph.

Concerns mounted of possible hot spots cropping up as winds began howling during the early morning.

Officials said Tuesday the Getty Fire was sparked when high winds carried a tree branch from outside of a brush clearance zone into a city power line.

The blaze, which broke out near North Sepulveda Boulevard to the west of the 405 Freeway around 1:30 a.m. Monday, went on the burn 656 acres and destroy 12 homes while damaging five more.

While the flames were mostly under control with containment at 15%, firefighters remained on guard to prevent the blaze from rekindling with the major Santa Ana wind event.

"It takes one ember down wind to start another brush fire," Los Angeles Fire Chief Ralph Terrazas said. "I encourage all people in the city of Los Angeles, and the neighboring communities, to register for alerts at NotifyLA."

Many homes in Brentwood were seen red-tagged, charred and unrecognizable.

The borders of the remaining mandatory evacuation zone are:
-Kenter Avenue is the west border
-Sunset Blvd is the south border
-Area just south of Mountaingate Drive is the north border
-Area adjacent to 405 FWY and Sepulveda Boulevard is the east border

All evacuation orders for the #GettyFire are lifted with the exception of the areas between:

Winds are expected to reach 30 to 40 mph, with a red flag warning in place through Thursday at 6 p.m.