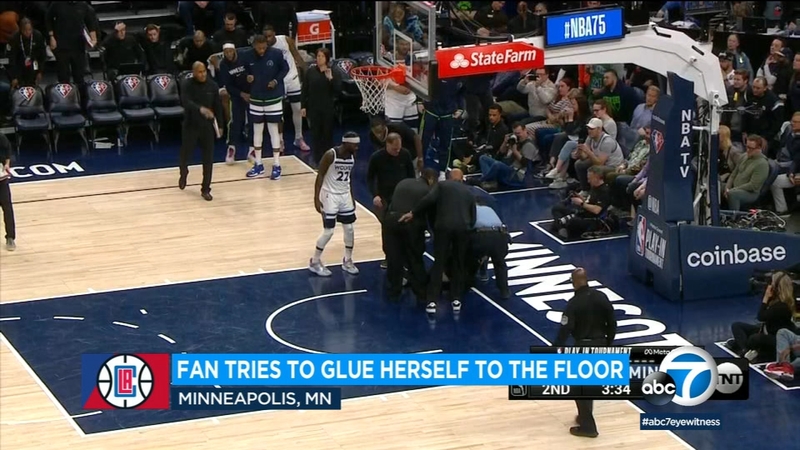 MINNEAPOLIS, Minn. (KABC) -- The Los Angeles Clippers squandered an opportunity to make the playoffs in Tuesday night's loss to the Minnesota Timberwolves in the first round of the play-in tournament at the Target Center, but the loss itself is not what has people buzzing.

At one point, a fan interrupted the game by trying to glue herself to the floor. The moment sent people on social media into a frenzy.

Some lady just tried to glue herself to the court 🤨 pic.twitter.com/zV4UH6uqDK

A woman attempted to glue her hand to the court during the Minnesota Timberwolves vs. Los Angeles Clippers play in game at Target Center. #Twolves pic.twitter.com/50QC1GtxVe

The only thing crazier than gluing your hand to a basketball court in the middle of an NBA playoff game is thinking you can do it with some basic arts and craft white glue pic.twitter.com/asEnObau0b

Dubbed as "glue girl," the woman was an apparent animal rights protester, trying to make a statement about the Timberwolves' owner's chicken farm that recently killed a large number of chickens due to a bird flu outbreak.

Allie LaForce, a sideline reporter for TNT, reported that the woman tried to glue her wrists to the floor and refused to leave initially, but security soon removed her.

The glue was then cleaned up and the game resumed.

The Clippers return home Friday to play in a win or go home game against either the San Antonio Spurs or New Orleans Pelicans.