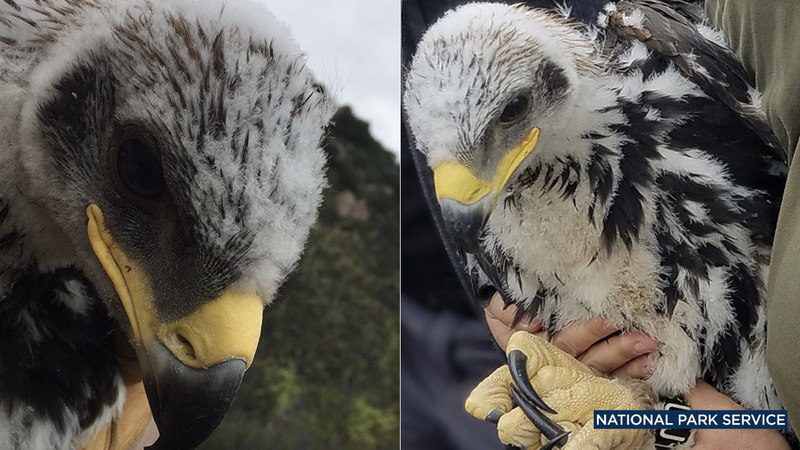 SANTA MONICA MOUNTAINS (KABC) -- For the first time since the 1980s, a nest and a pair of golden eagle chicks have been found in the Santa Monica Mountains.

Golden eagles are a protected species and a cousin of the bald eagle. Historically they were more prevalent in the Santa Monica Mountains, but their numbers have declined.

The last time a nest was detected in the area was in the late 1980s in Lobo Canyon.

A consultant conducting bird surveys on private property came across the nesting chicks and alerted the National Park Service. Federal biologists found the nest and banded the two chicks, a male and female, for monitoring purposes.

Golden eagles typically feed on rabbits and squirrels, in addition to snakes and coyote pups. This particular eagle family appeared to be feasting mostly on western gulls, as there were seven gull wings found in the nest.

Katy Delaney, an ecologist with the Santa Monica Mountains Recreation Area, said humans remain a threat to golden eagles, both through intentional trapping as well as habitat loss and incidental threats like electrocution from power lines.

"We haven't seen them in so many years, though they could have been around and staying away from people." Delaney said. "We just went through a huge fire and drought, and we're also not going to see a decrease in urban development."